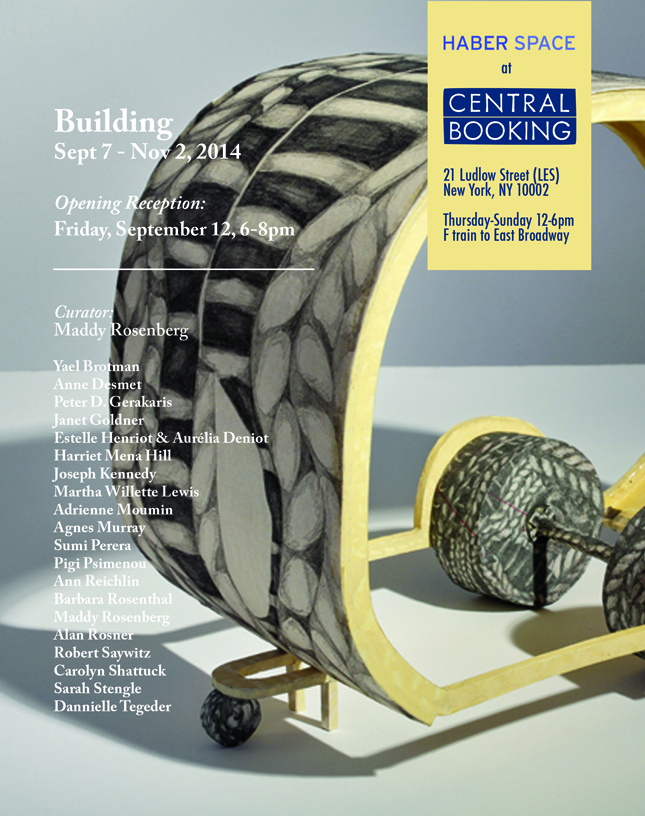 Building opens in HaberSpace, CENTRAL BOOKING’s gallery for art & science exhibitions, with a reception on September 12th. Curated by CENTRAL BOOKING Founder Maddy Rosenberg, Building offers a look at how artists grapple with the structure of structures. Joining us for a special preview with a reception during the LES gallery walk on September 7 in our OffLINE space is BLOCK par·ti, [pärtÓ: the basic scheme or concept for an architectural design reoriented by a diagram]. Curated by Heather Zises, Founder of (READ)art and Amy Kisch, Founder + CEO of AKArt Advisory, the exhibition includes artworks that serve as diagrams of emotional and physical spaces.

The word “building” is inherently at once both the action of creating and the object of its creation. We begin with nothing, design by pushing and pulling, adding and subtracting, while amassing the elements to create the structure until we have an object that literally has to stand. Perhaps it stands not on its own two feet, but definitely upon a foundation, however precariously it is balancing or it is firmly rooted. For some it is enough to have the dream, for others they need the grounding of reality and their “building” is necessary to exist in actuality, they dream the building into the physical world. And yet they may be meant to inhabit but are still as elusive for our habitation as if they were lines on a paper; the dream remains unrealized, it is a building but one that will probably find being built an elusive endeavor.

Janet Goldner welds as she builds, the steel affirms strength yet the deliberate searing through the metal imbues them with a sense of fragility. With Ann Reichlin it is the opposite, she models a larger world where metal delicately builds up to create the boldness. Yael Brotman amuses us with her etched “campers” that may or may not be models while Joseph Kennedy delves into possibilities with his model buildings. Pigi Psimenou sees the big picture and finds the detail in her own discoveries in found spaces. Robert Saywitz builds us roads to nowhere that bring us along for the ride while Sarah Stengle saves the curves, sticking with right angles to diagram an engineer’s dream. The cities of Dannielle Tegeder, though abstractly built both on and off the wall, are indeed cities mapped in her own very distinctive iconography.

Harriet Mena Hill‘s structures, too, emphasize their geometry as they become about it as well. The best laid plans of Sumi Perera are embossed on our memory while Adrienne Moumin does not dream her structures, but she distorts and rearranges as they dance along the picture plane, she might as well have conjured them. Peter D. Gerakaris mimics a geometry of simple shapes but the planes are sometimes on the surface and sometimes just playing with our perceptions. Carolyn Shattuck‘s piece is an artist’s book of mathematical proportions with the music dancing across the surfaces while the forms of Martha Willette Lewis may seem mechanically drawn but echo and reverberate. Alan Rosner wryfully stacks the skin of matchboxes so they could be vertically inhabited, perhaps by an ant colony. Agnes Murray stacks images steeped in history upon each other that fill the wall, at once tearing apart as uniting, while Anne Desmet chips away at her buildings both metaphorically and literally in her capturing of bits here and there. Maddy Rosenberg builds her own structures out of both old and new, from here and there in layers. For Estelle Henriot & Aurélia Deniot, the hardware of building is a beginning, not an end. Barbara Rosenthal, daughter of an architect, playfully builds before us, with an insight into her process.

To put together, to construct and to find a space and place in the physical world or the world of possibilities, is the task at hand. 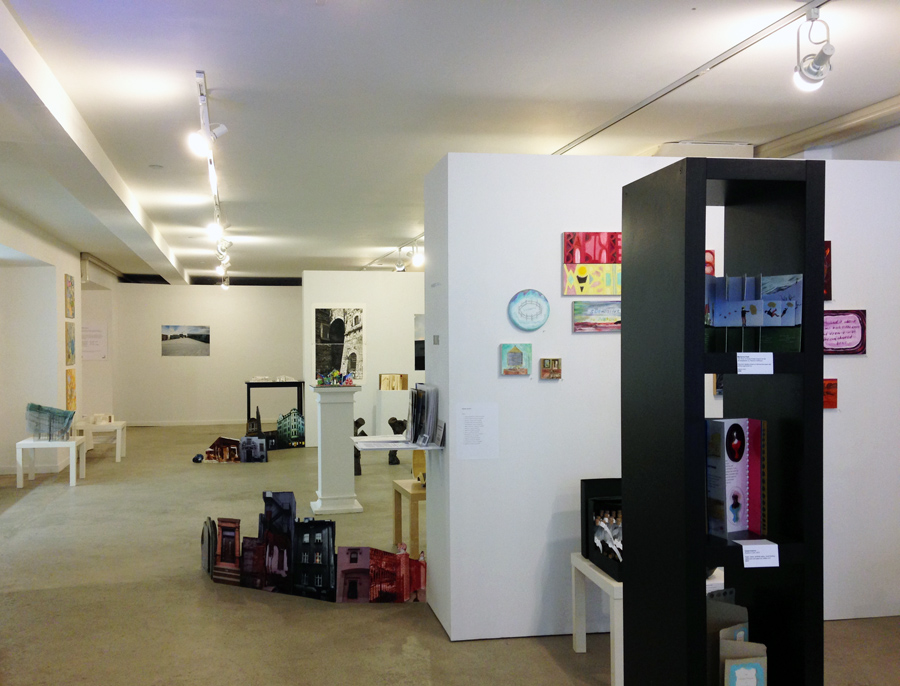 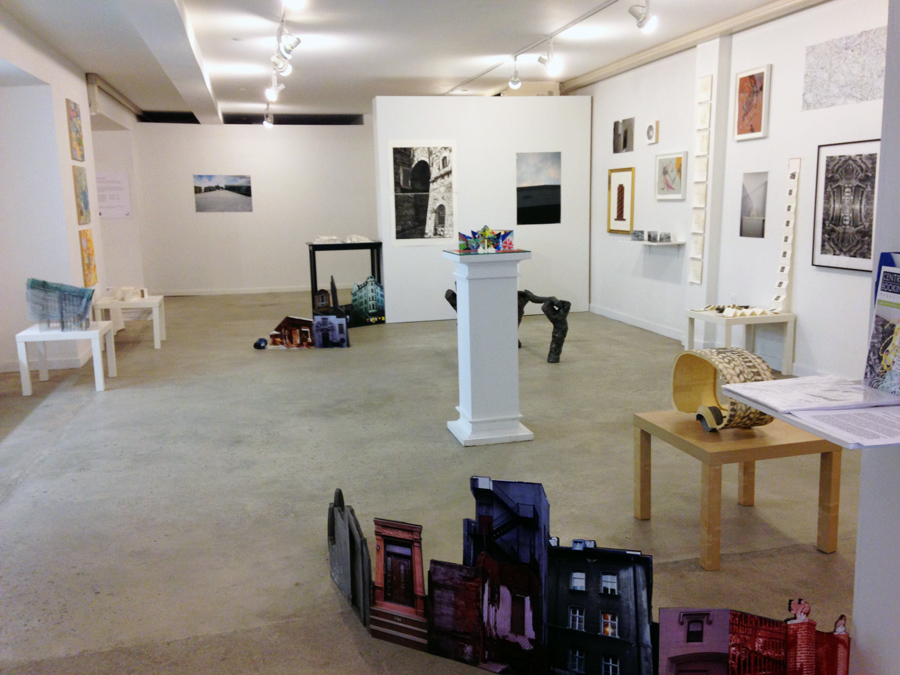 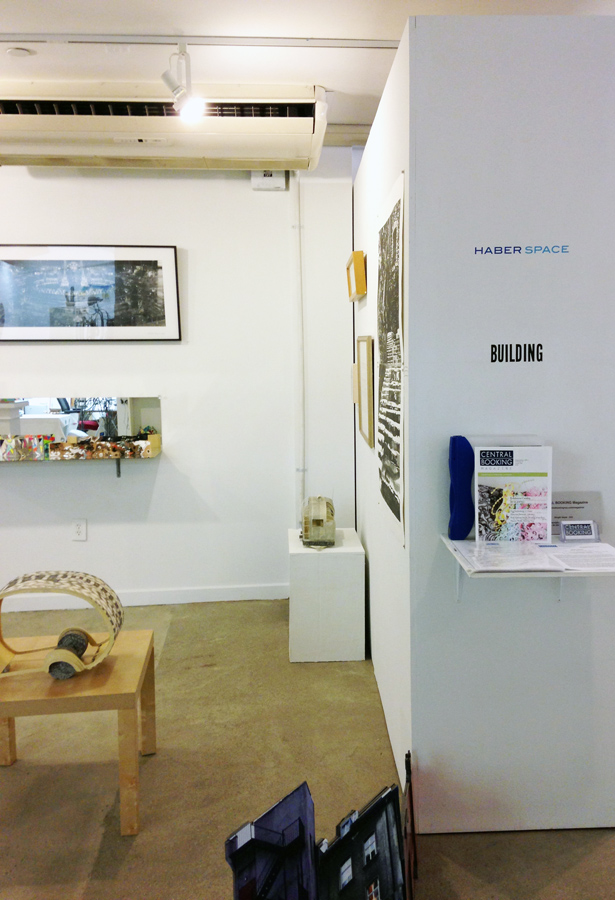 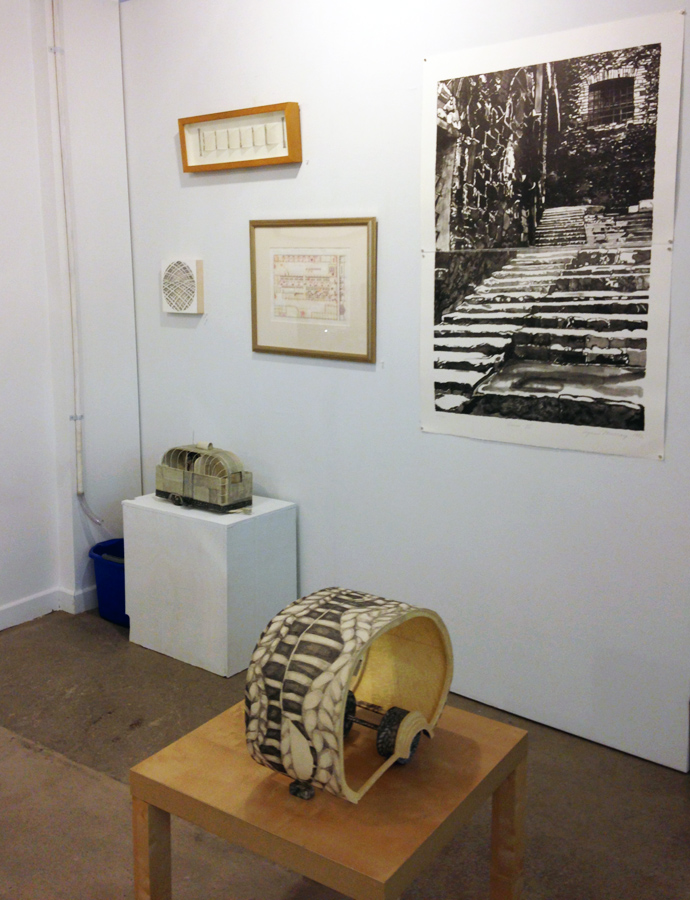 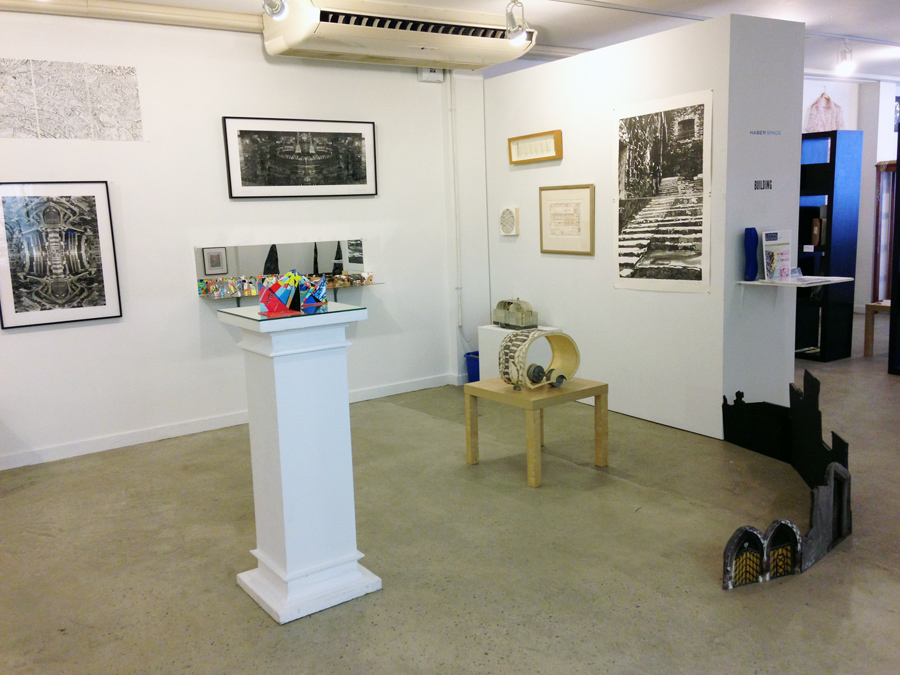 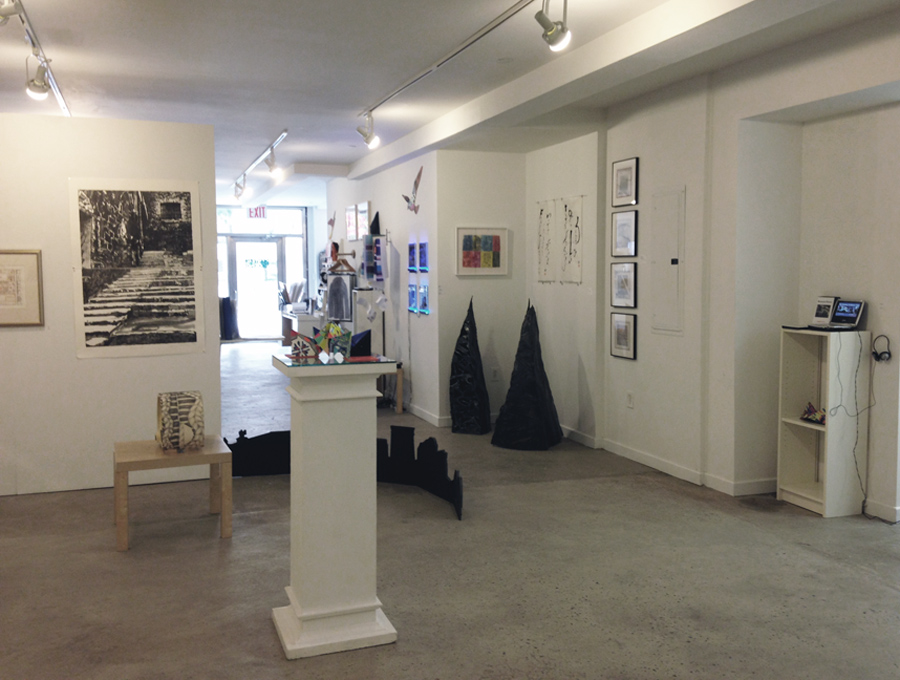 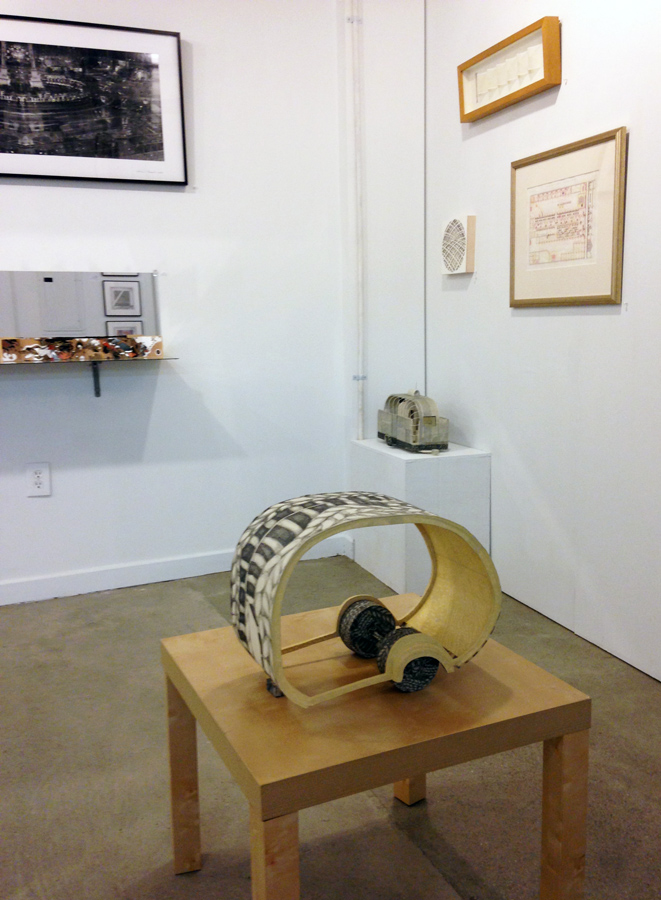 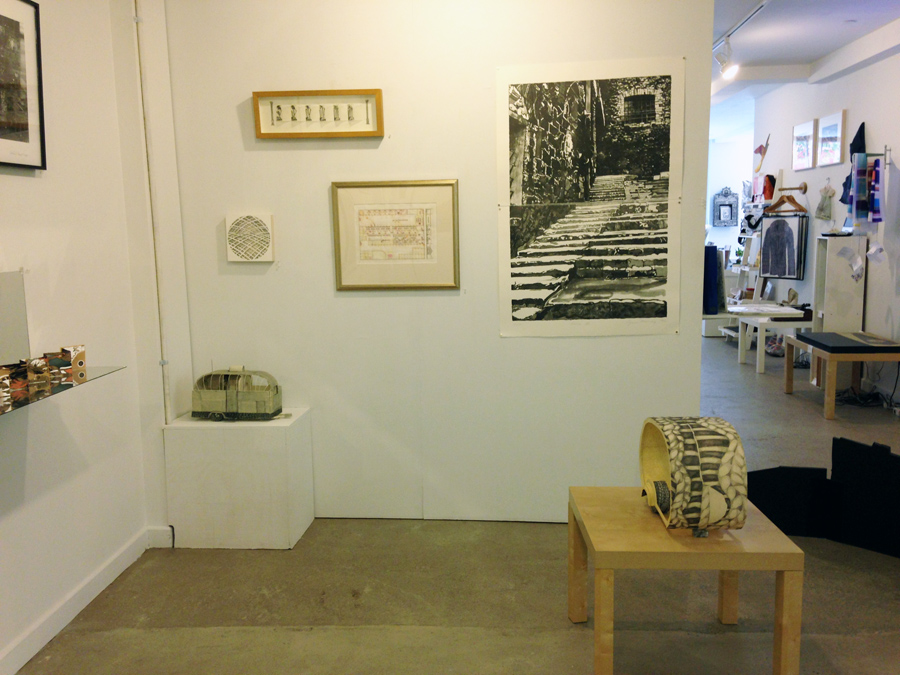 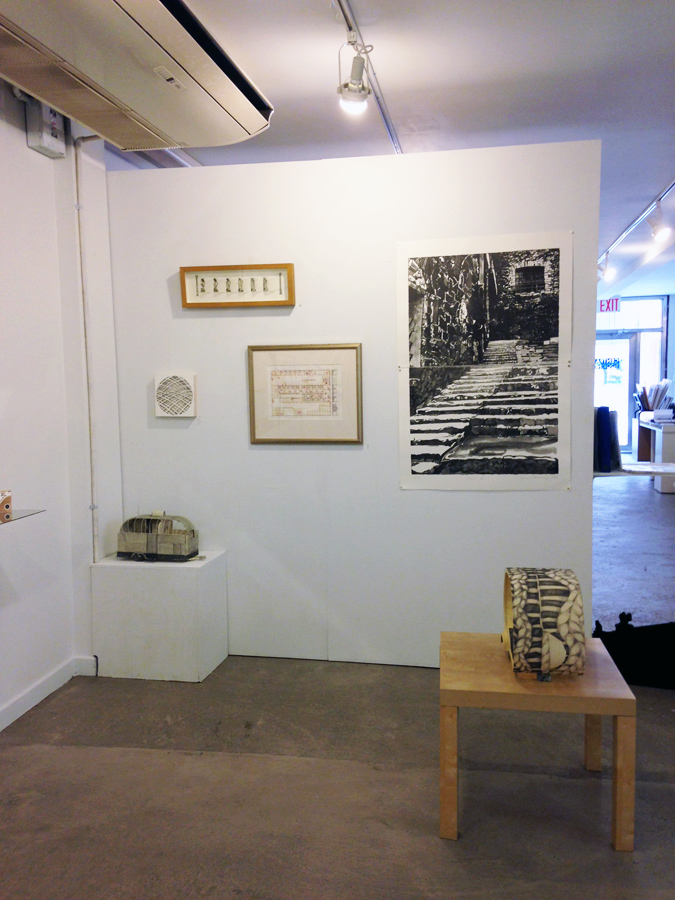 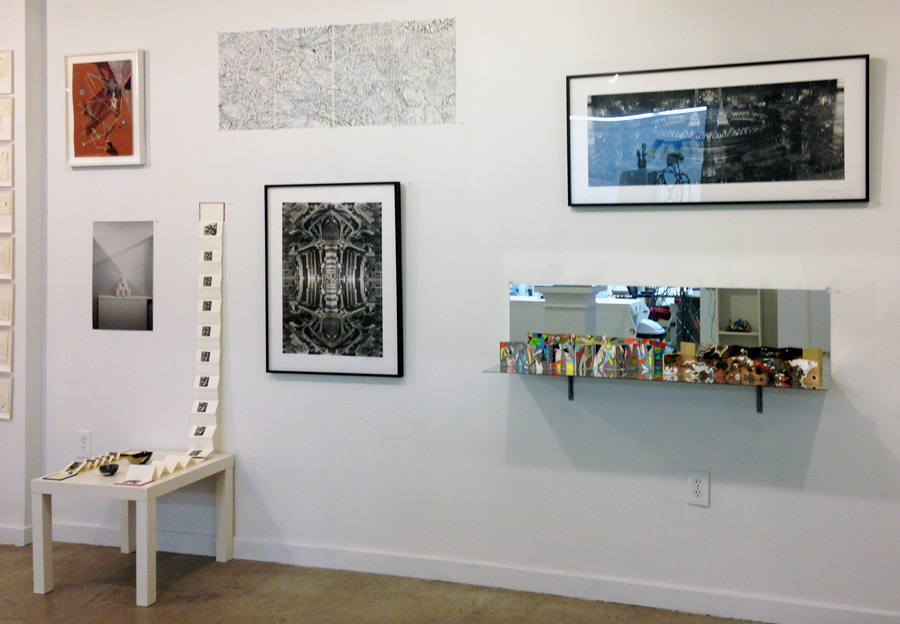 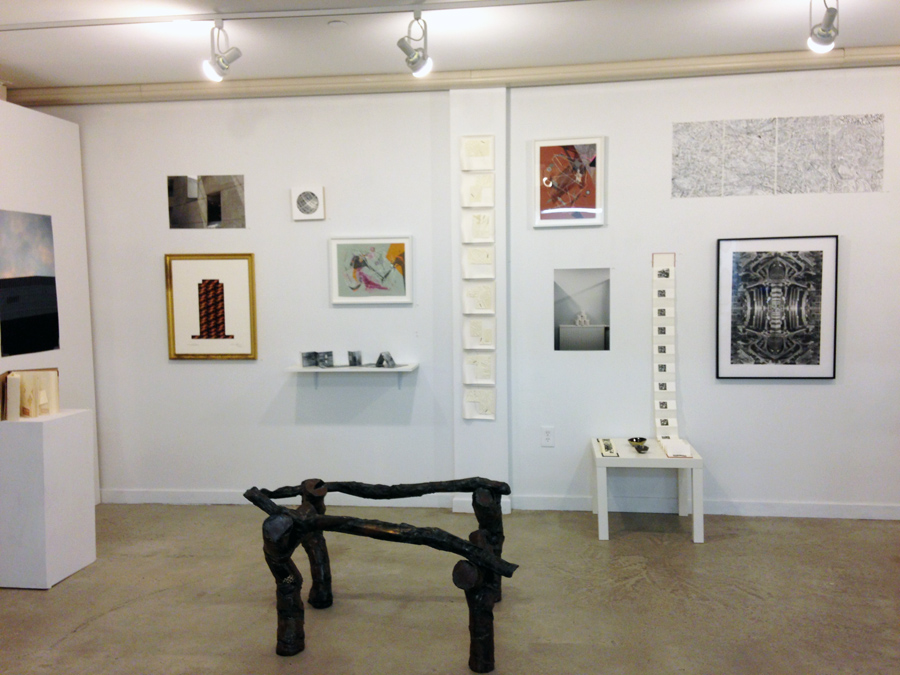 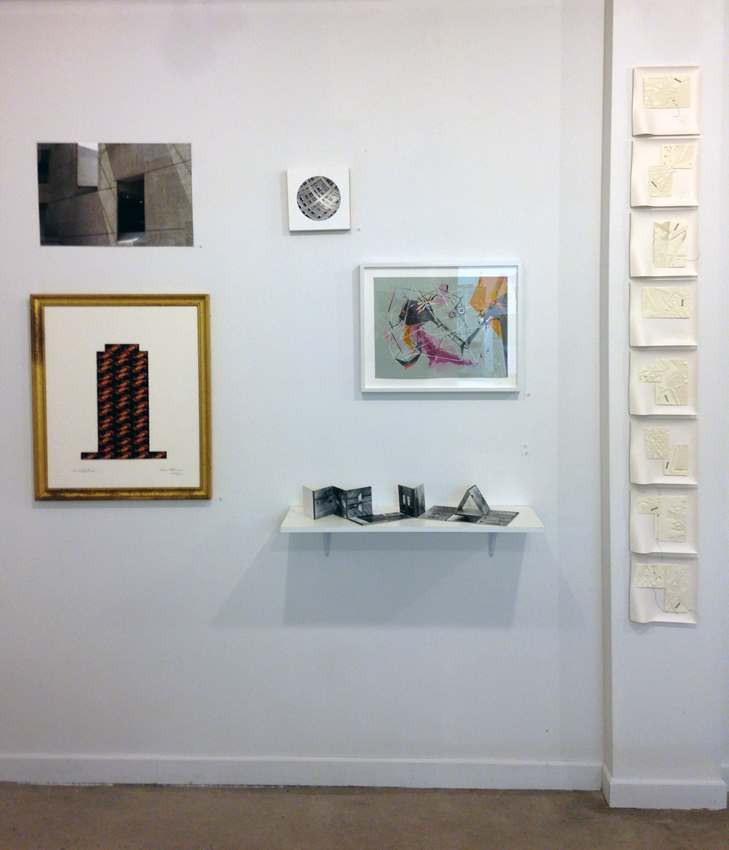 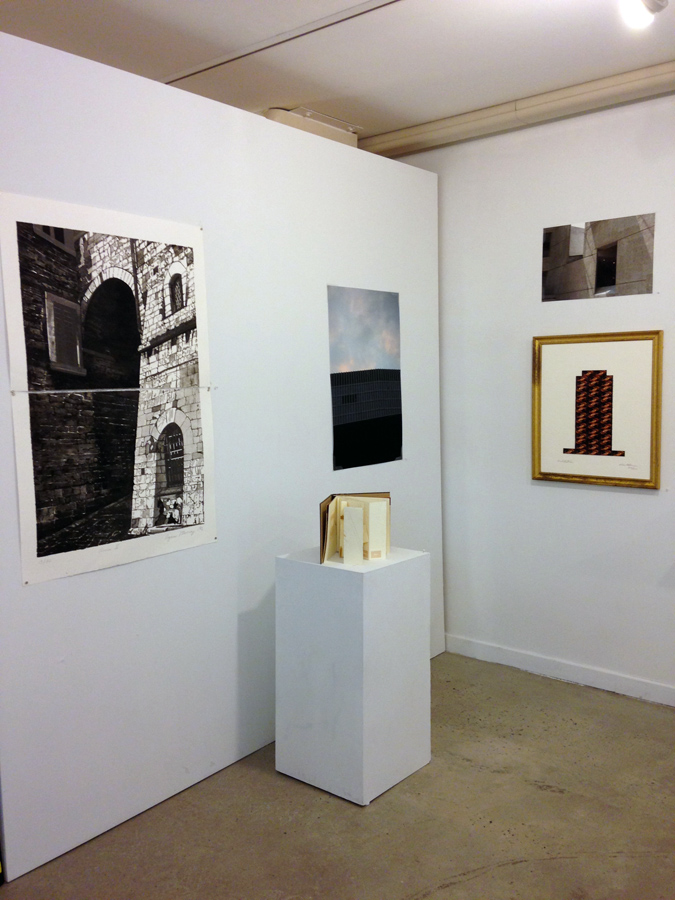 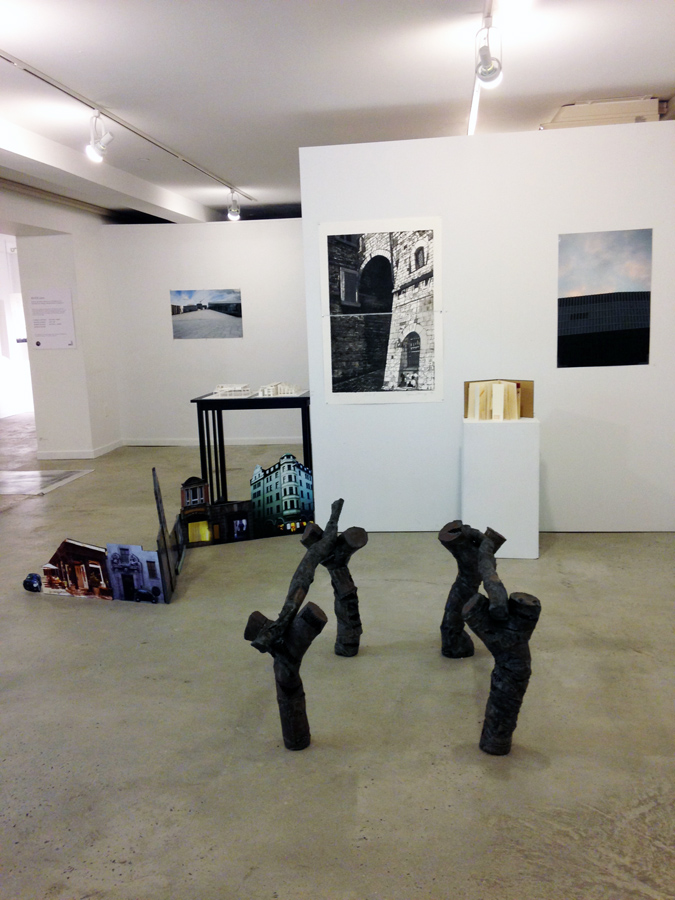 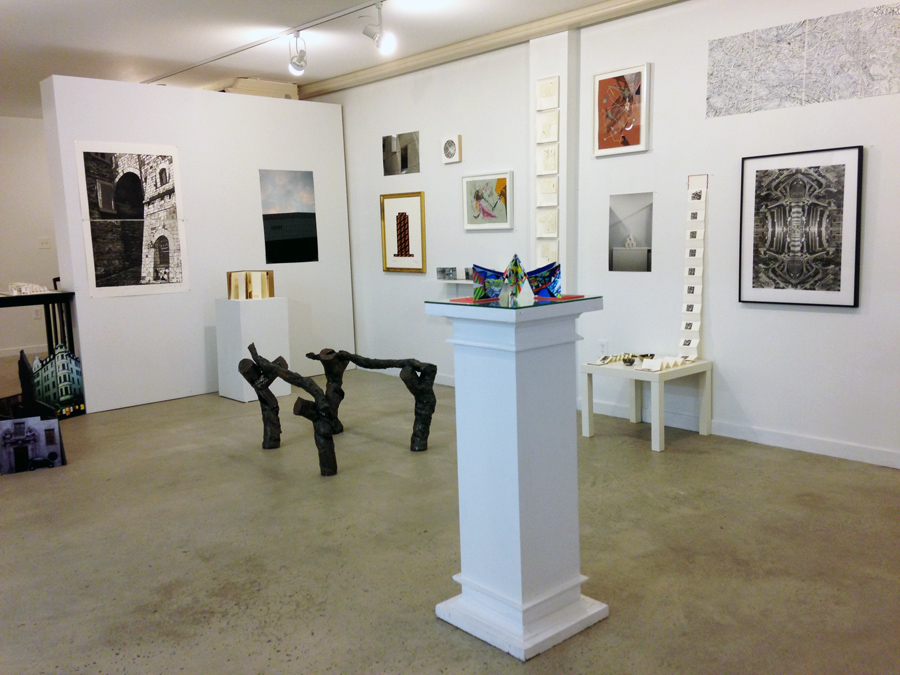 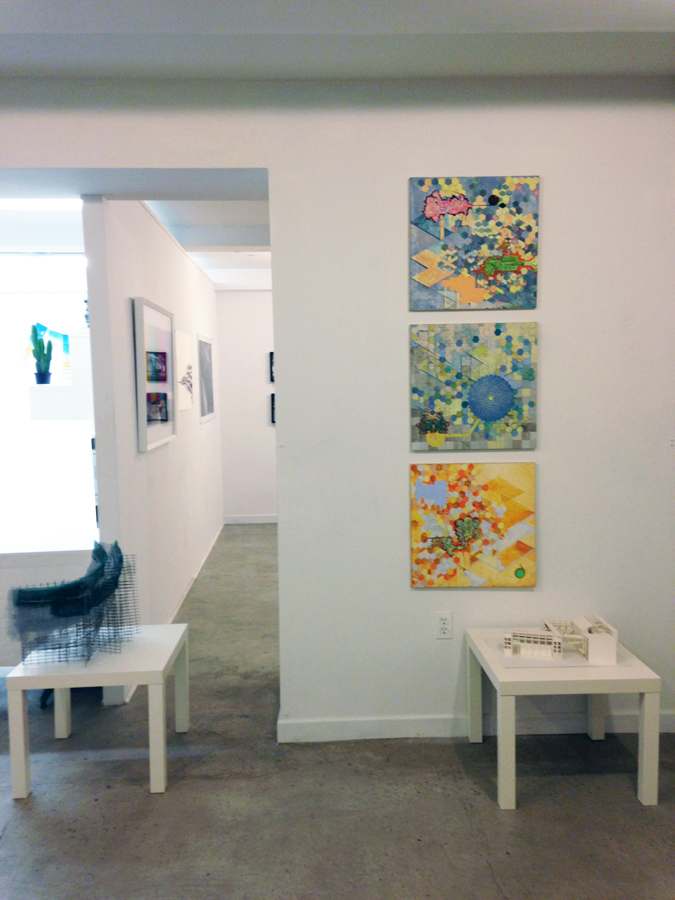 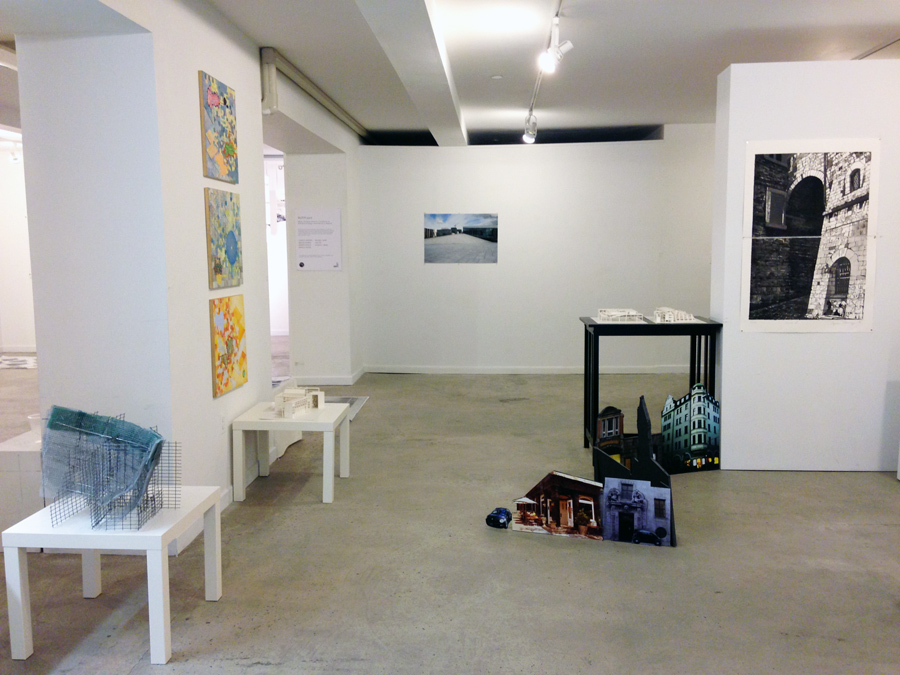 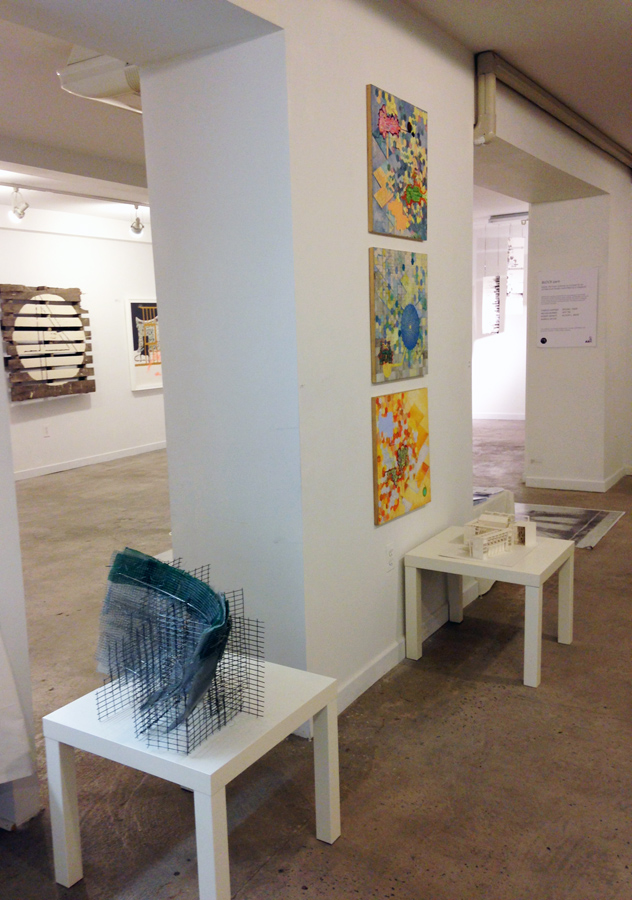 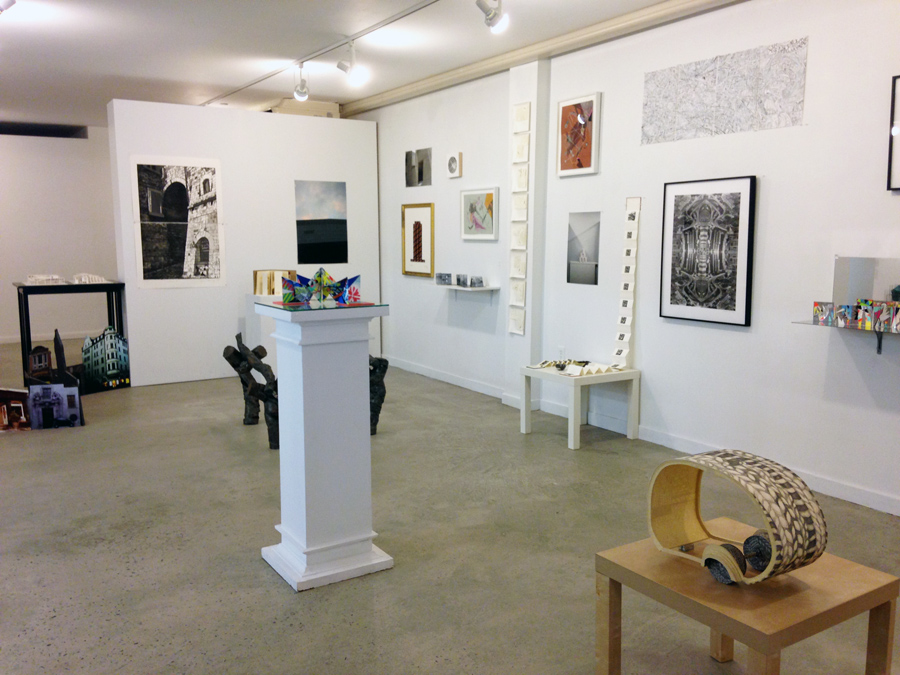 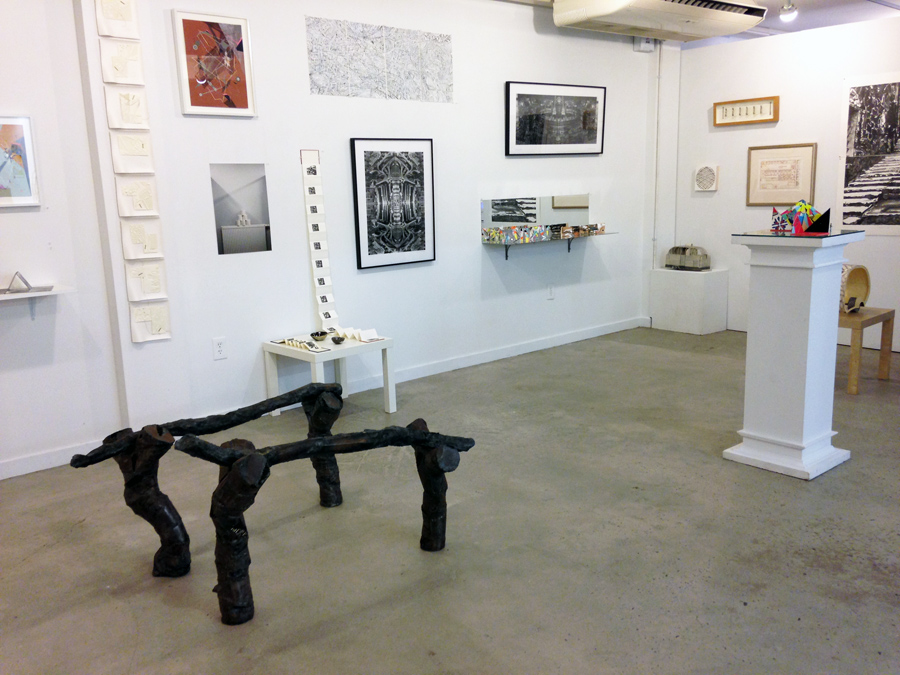 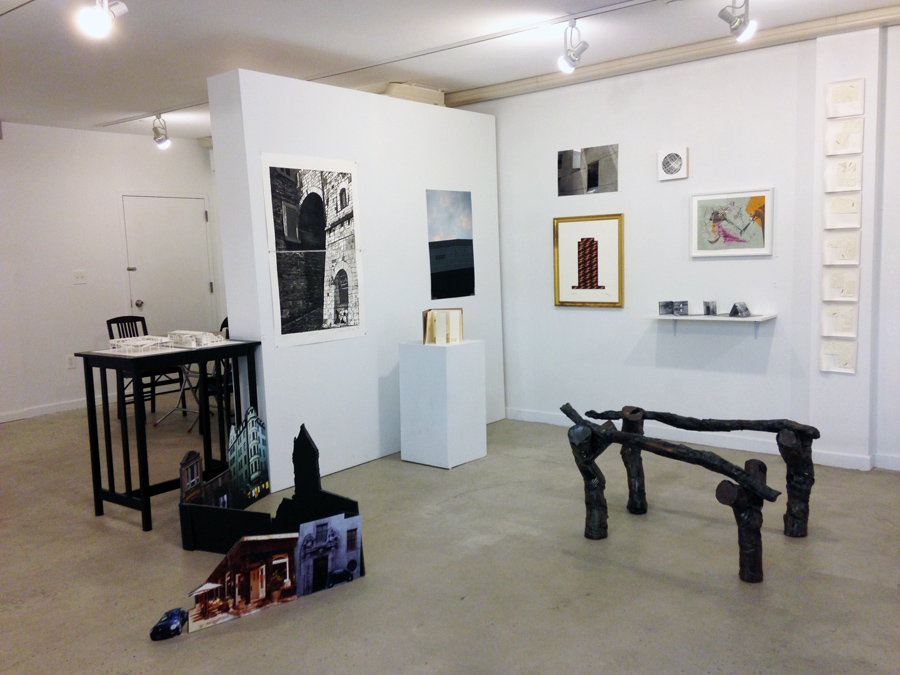 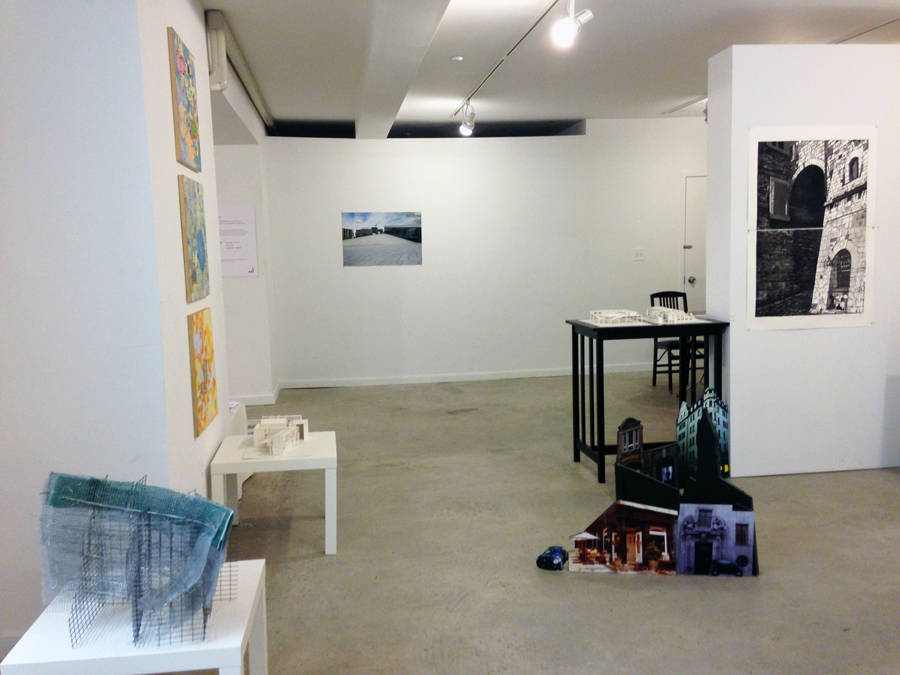 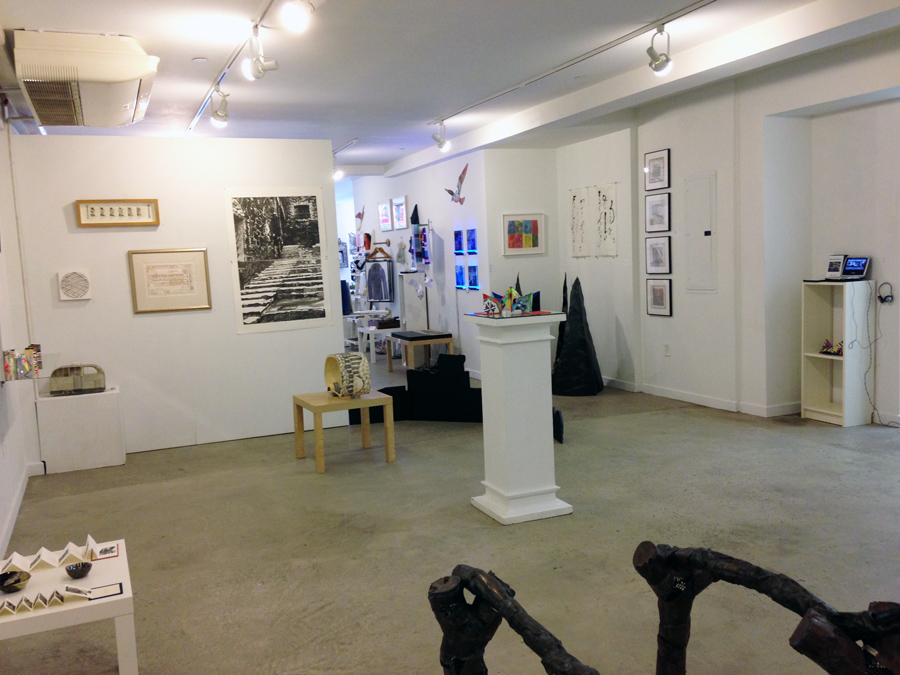 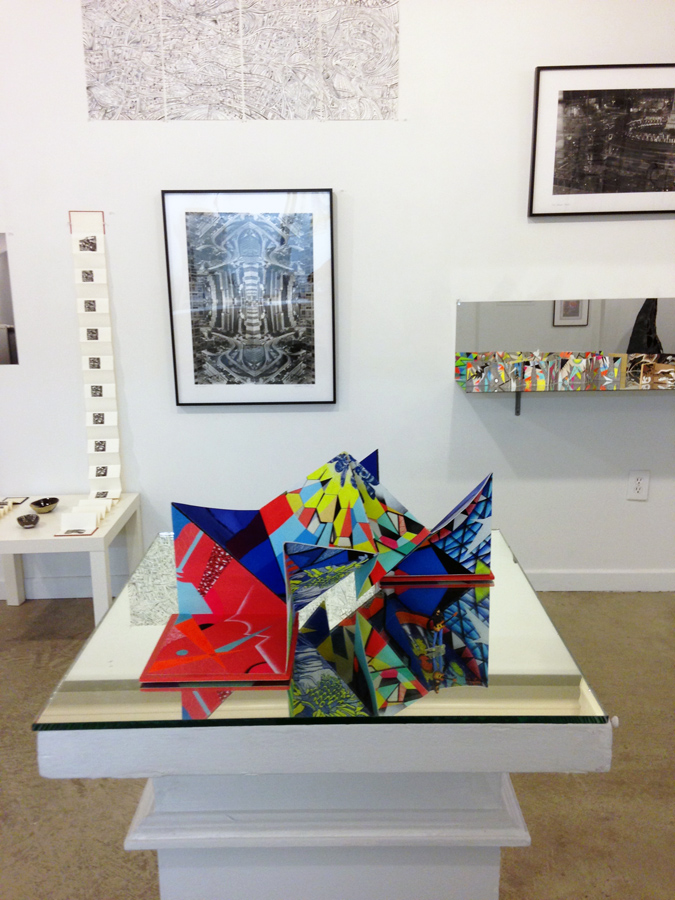