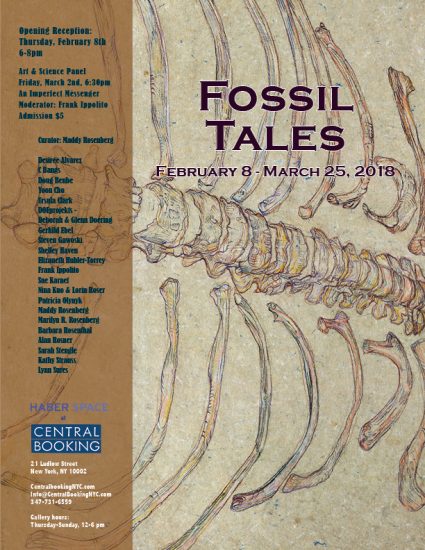 From the earth, back to the earth, the cycle of our material existence. But sometimes all is not ashes, we leave a trace behind – whether it be almost perfectly preserved bones or imprints of organic matter that are nothing more than mere embedded shadows. There is a history of the living on this earth cast in encrusted layers, extended from well before humans could discover and acknowledge them. Whether simple or complex, some survive to this day, others were her and gone in a blink of time. We inch closer to uncovering the reasons why such powerful animals such as the dinosaurs disappeared, leaving us enough to reconstruct their existence and to
question the span of ours.

These artists do more than explore, they scratch beneath the surface to reveal. Frank Ippolito renders dia-grammatic versions of dinosaur bones for the historical record, ready for display. Marilyn R. Rosenberg arranges her found bones as they may have been set in stone, while Desirée Alvarez montages drawings of dinosaur bones captured in motion, without a human witness. Though Nina Kuo and Lorin Roser may excavate the caves of China for dinosaur eggs to replicate in clay, Lynn Sures fashions her caves of paper and lends a hand to delicate drawings of petrified bones. The prints of Shelley Haven examine the textures of the rocks for any indication of life and Ursula Clark molds and buries in the sand traces of plant and animal life of a possible bygone era.

With Alan Rosner, manmade mechanical parts emulate creatures emerging from the sea. Barbara Rosenthal combs the seas and the land, finding no two creatures exactly alike. The altered page of Doug Beube perhaps embodies a long gone flying creature of its own, but the subject of the sculptural paper collage of C Bangs returns heaven to earth, riding on the back of an extinct being.

The accordion book of Patricia Olynyk imprints its way through prehistory, as the basic books of Deborah and Glenn Doering cast the world in its own story of the beginnings. Elizabeth Hubler-Torrey triples our pleasure- with her simulated re-creation in three panels. Barely visible, the embossings of Gerhild Ebel mark the single cell organisms of origin, as Steven Gawoski expands upon them, adding form and detail in his drawings, with art mimicking life.
The ethereal layered image-laden cloth pieces of Kathy Strauss echo a distant memory. The fossils Yoon Cho employ in her work seem to be frozen in nascent development, removed from their habitat to loom above it. The boxed specimens of Maddy Rosenberg are perhaps preserved through millennia in ice, as the installation of Sue Karnet plays with discarded preserves of another kind. Sarah Stengle scrolls New York fossil bed images through a MOVIEOLA film editing machine, linking the ancient with the antique.

From the remains of the barest life forms to full-fledged creatures that no longer inhabit the earth, we are able to re-construct once unknowable past lives. It is up to us whether we use the knowledge to understand the present with somewhat more insight.