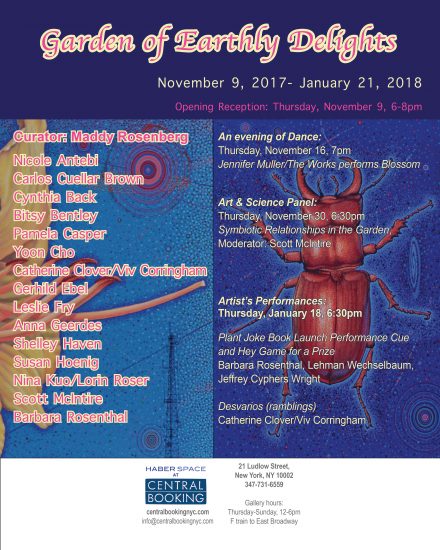 Nature prefers diversity and builds ecosystems accordingly. Interconnected communities each go about their business, yet spiral out to affect the neighbors. Dig up a shovel of soil and you have a shovelful of roots and insects- and that is only what can be observed with the naked eye. Nature crafts its own gardens as we may attempt to shape and weed. For Nature there are no weeds in the world, but a constant need to balance predators and survivors to keep the systems flowing. Ultimately the seeds are spread through creatures large and small with even the wind playing its part – only to root and absorb into another ecosystem. Damage one and the damage spreads, the earth is not contained. Yet maintain the balance and small to large become working elements in every plot of land, living for themselves and a greater good.

The paintings of Anna Geerdes react to the insights of the 18th century Prussian Alex von Humboldt who viewed art and science as only natural. Carlos Cuellar Brown takes the language of science to diagram the garden as a representation of a larger earth. Scott McIntire cultivates his garden and catalogs it, as well, from the land and flying creatures to the flowers they inhabit. Nicole Antebi discovered Darwin’s weed garden thriving with activity and placed it beside her own, while Nina Kuo and Lorin Roser take it one step further and has us comb the weeds in a rhythmic dance, as we would through our hair.

The garden of Cynthia Back is a tranquil placement of rocks and soil along the surface; Pamela Casper explores the interconnected worlds below, teaming within the garden soil.

Bitsy Bentley may create a garden in miniature, but Catherine Clover and Viv Corringham capture and isolate the full-sized sounds of the garden and the cycle of life. Susan Hoenig examines the leafy lives within the garden confines, as Shelley Haven take us down the garden path, treading lightly so as not to disturb. Barbara Rosenthal finds the lighter side of life as a plant.

Yoon Cho places herself as a stranger in a strange land, not one with her surroundings, as Leslie Fry mines the soils beyond her home and goes to the roots. Gerhild Ebel deals with the contamination from a greater world on the life teaming in every plot of grass.

A weed is only what is deemed by human intervention as unwanted, Nature makes a place for all.