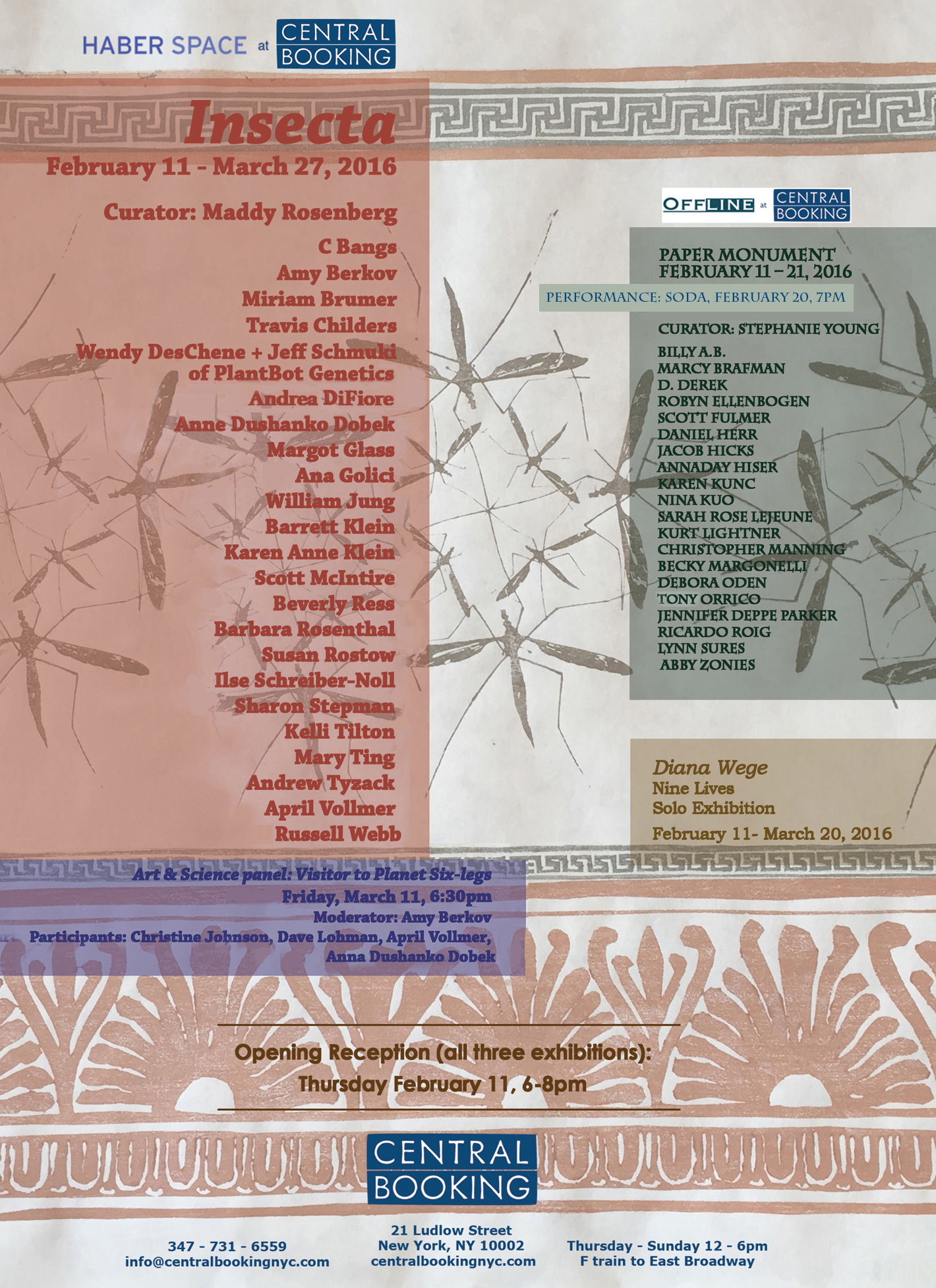 The earth is teaming with microcosms of millions upon millions of crawling and flying insects, each building their own worlds while inhabiting ours. These artists of Insecta reveal to us a bit of the lives of these miniature neighbors of ours who exist and flourish. Their daily routines are explored through intense examination, detailed focus and, alas, the effect of humanity’s intrusions upon them.

Amy Berkov puts research into practice in her dual life as tropical ecologist and artist. Scott McIntire offers us glimpses into his backyard in high keyed color as Ilse Schreiber-Noll studies the wasp in living color. Andrea DiFiore depicts the butterfly on different levels while Anne Dushanko Dobek emulates the entomologist’s craft to foretell a butterfly dystopia. Miriam Brumer‘s butterflies take flights of fancy though, with Margot Glass, they blend in to their surrounding patterns.

The videos of Barbara Rosenthal tell tales of the resilience of a Russian fly and insect metamorphosis. Wendy DesChene + Jeff Schmuki of PlantBot Genetics fascinates and describes the morphing of a moth. Beverly Ress wittily brings us into the world of a cicada. Kelli Tilton paints diminutive portraits of outsized insects as Ana Golici introduces us to the lives of fleas in portraiture. April Vollmer may turn a crane fly into a mandala, but William Jung‘s sculptural pill bug resembles a sleeve of armor. Scientist and artist Barrett Klein models the insect in keen observation while Karen Anne Klein, Barrett’s influence (and mother), weaves insect narratives and conversations. For C Bangs, bees and dragonflies are positioned in space with instruments of time.

Susan Rostow’s pages are embedded with two-winged creatures while Sharon Stepman captures them with light. Andrew Tyzack takes meticulous inventory of the bumblebee and Travis Childers builds a beehive for them of plastic tips. Mary Ting highlights a bee devastation that both overwhelms and saddens. Russell Webb boxed and bagged his bugs for eternity.