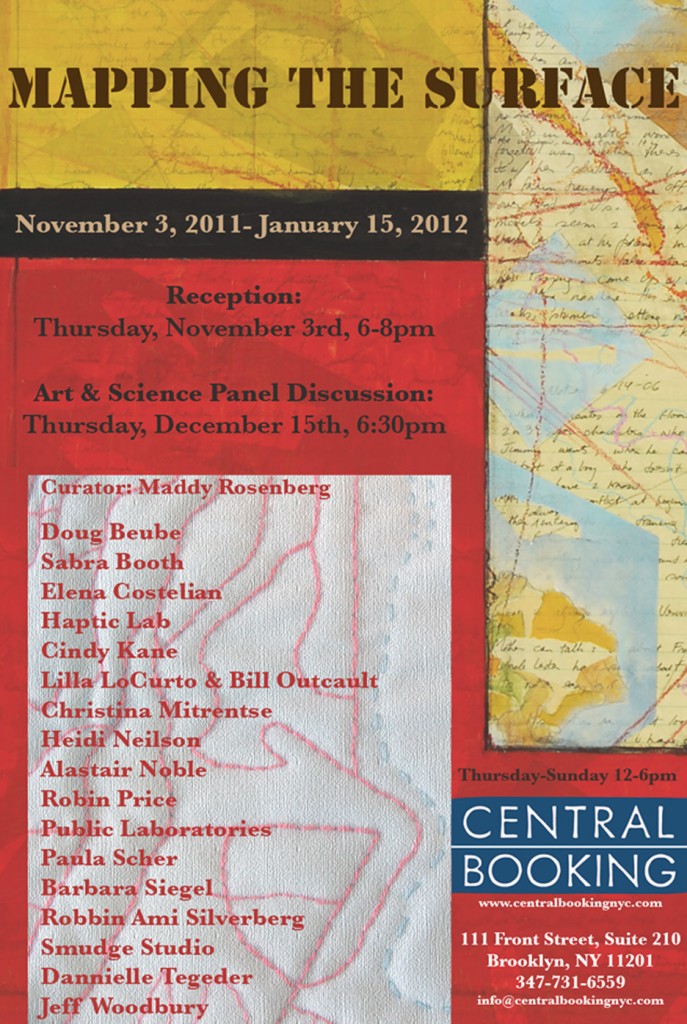 We are accustomed to looking at maps in attempts to find direction, our relationship to a physical interpretation of the land. But that land can be more than a city or country, it can help us to navigate our bodies, to understand our environment beyond its physicality into the realm of cultural space, and to grasp an understanding though the visceral. Cartographers can tell us more than just the routes from one point to another, they can map terrains of landscape or psychological space, that amorphous state that adds up to a sense of a place beyond mere cataloging. They can also reduce all to the basic, the pure essence of line and plane. We may glide across the surface but there always seems to be a rumble below it, roaming around a skin that is, as skin is, porous and organic.

The altered, eroded, sliced and diced work of Doug Beube challenges us to read geography in the third dimension. Jeff Woodbury plays with our idea of mapping both physically with the malleability of rubber maps and metaphorically as we follow a path along a tree branch. Christina Mitrentse folds, assembles and hides travel maps, subverting their original intent, presenting us with an unreadable atlas as Heidi Neilson utilizes a traditional idea of cartography and conceptualizes it into an impossibility of a re-configured world.

The collaged artist’s book of Robin Price extends beyond the 43rd parallel into a personal numerology. Cindy Kane maps individuals we think we know in her writers series and explores regions through their particularity of senses; Dannielle Tegeder goes one step further and plots a highly abstracted place in multi-dimensional space.

Haptic Lab, blankets a neighborhood, delineating boundaries through the texture of materials with *Paula Scher graphically interpreting regions, this one guiding us through India. Alastair Noble takes cyanotypes, the blueprints of architects, to emphasize the blueprint of an environment sculpted by nature. Lilla LoCurto & Bill Outcault have long used their own bodies and now others to extend and flatten skin into a topographical journey.

Sabra Booth provides an animated excursion of the gulf coast, mapping her experience of mapping the environmental disaster, while Public Laboratories photographs the spill from a bird’s eye view, allowing us our own interpretations. The projects of Smudge Studio (Jamie Kruse and Elizabeth Ellsworth) evoke a time and place through the variety of consciously created elements of documentation as Robbin Ami Silverberg creates a sense of New York neighborhoods through accumulation of particular elements that brings the amorphous into the more concrete. Central to Barbara Siegel’s sculptural piece is a boulder that began a controversy over geographic ownership. For another take on the complications of history, Elena Costellian finds herself in a space haunted by the act of its own past circling around, and documents the process of her process of capturing it through a linear retracing.

However perceived, a map guides us to more than one destination.

* Courtesy of Jim Kempner Fine Art. We also encourage you to watch Jim’s all too truthful comic vision of the art world,
The Madness of Art