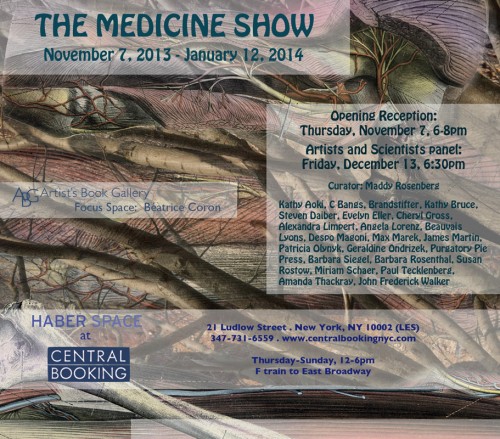 New York, NY – The Medicine Show, curated by Maddy Rosenberg, opens on November 7th in HaberSpace, CENTRAL BOOKING’s gallery for art and science exhibitions. Though an exhibition of contemporary artists delving into anatomy, it tips its hat to historical medical museums. We are also pleased to have the hand cuttings of Béatrice Coron highlighted in the Focus Space in our Artist’s Book Gallery, with her own take on the human form.

The fascination with the workings of the human body is naturally a long standing curiosity, with artists reaching back to medical texts, while others bounce off of their own inner workings. Kathy Aoki reminds us of early anatomy lessons, reminiscent of Rembrandt, as we read a modern lesson from Evelyn Eller. Beauvais Lyons invites us to do double takes with his variations on ˮlegitimateˮ scientific illustration whereas Steven Daiber takes a found 19th century text and updates it. Despo Magoni dissects, revamps and recreates Gray’s Anatomy into all its parts. Alexandra Limpert in her automatons reveals the mechanics of the body on a human scale while Miriam Schaer presents the body as book in the simulation of a familiar home teaching tool. Cheryl Gross draws her own variations on the inner workings of the body. Kathy Bruce deals with the body’s building blocks while Patricia Olynyk reveals an interior peek. C Bangs has us coming and going in a two-sided skeleton. Purgatory Pie Press presents the spine through MRIs whereas Brandstifter x rays and re-arranges. Barbara Rosenthal finds her spine in bluejeans as Paul Tecklenberg dresses x rays. John Frederick Walker flays his figures to get to the layers below. Max Marek splices and dices in his subtle paper layering’s of the body as Barbara Siegel collages and layers in her own way. James Martin buries his bones in tangled abstractions as Geraldine Ondrizek unscrolls the chromosomes of illness. Susan Rostow embeds bones and pills while Amanda Thackray fills her own vials. All in all, these artists dig deep in the age-old human quest to figure out the figure.

To round out the exhibition, the catalog of The Medicine Show will be part of November’s issue of CENTRAL BOOKING Magazine, https://centralbookingnyc.com/magazine