C Bangs: Decade and a Half Dialogue 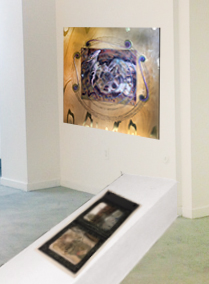 Decade and a Half Dialogue Catalog

"I met Evan Harris Walker, a colleague of my husband, Dr. Greg Matloff, at a conference in Monterey, California in late 1991. We began our dialogue (which lasted until he died in August, 2006) on quantum physics and the nature of consciousness. Dr. Walker is the author of The Physics of Consciousness (Perseus Books: 2000). He proposed a theory of the nature of consciousness tied to well-known physical principles of quantum mechanics and based on quantitative physical and neurophysiological data. He contributed to the measurement problem in quantum mechanics and originated the ‘Quantum Observer Theory’ relating to state vector collapse. This theory is of significance in parapsychology. Both of these theories have been supported by extensive and predicted experimental results. He also contributed to neurophysiology, specifically to the mechanism of synaptic functioning, and in psychology to the understanding of optical illusion phenomenon. The beginning of our dialogue that caught my attention was when he said there is no such thing as space in the quantum world. This statement was then born out by what appeared to be space shrinking, during our drive around the Monterey Peninsula on a sight-seeing trip and having dinner in Carmel. On our way back to Monterey we went directly (which I did not know was possible) and so instead of a seventeen-mile drive around the peninsula we traveled the more direct route of a few miles to Monterey. After the conference we said goodbye, fully intending to continue our dialogue at some time in the future and trying to understand the “spaceless” domain of quantum physics. My husband and I drove to San Francisco to stay with friends. Stopping on the way at a diner near Stanford, we ordered our dinner. Harris walked in and continued our dialogue.
Included in the digital collages are quantum equations and diagrams by Dr. Evan Harris Walker as sacred writing. In our dialogue we exchanged ideas on the reality or non-reality of “space-time” and on his innovative theories concerning the relationship between quantum mechanics and consciousness. These equations function as design elements and refer to the interconnectivity of everything and the relationship of time to space."
-C Bangs

C Bangs' work investigates frontier science combined with symbolist figuration. Archetypes of the Earth and cosmological elements are depicted from an ecological feminist perspective. She continues to explore the visual expression of scientific esoteric ideas in her work. Her work's premise is that we are part of the Earth and all the elements of our bodies at one time were formed within a star; we contain both systems within us. Her art in a wide variety of mediums is informed by mythology and the hope for human evolution.

Ongoing conversations with Bangs' husband, Dr. Gregory Matloff, about the laws of physics and the resulting collaboration in nine books on astronomy and astronautics continue to inspire her work. The collaborative atmosphere of their relationship has impacted the nature and future direction of their work. The ongoing conversations about the laws of physics that underlie the universe serve as a passionate inspiration.

Dr. Evan Harris Walker was recognized for his discovery of the role of Albert Einstein's then wife, Mileva Marić Einstein, in the development of the theory of relativity. His physics research was directed toward the problems of Big Bang cosmology, black hole phenomena, and dark matter in the universe. He developed concepts and designs that have resulted in numerous inventions including one invention in the field of solar energy and a development in the field of environmental protection. His inventions were introduced into the design of the Abrams Tank used in the Gulf War, contributing to the saving of 48 lives during that conflict. He made significant contributions on behalf of the United States government's interests to delay and mitigate the Yom Kippur War that occurred in 1973. Dr. Walker's contributions to non-nuclear designs for ballistic missile defense include the development of formulas to determine satellite electric-field effects on plasma probes and instrumentation. He was an authority on lunar-surface phenomena, particularly in the areas of photoelectric effects on surface features, meteoric impact effects, cratering statistics, surface and subsurface structure, and erosion transport mechanisms. He founded the Walker Cancer Research Institute and did research in cancer chemotherapy at its laboratory in Tallahassee (with collaborative programs at Florida State University and the National Magnet Laboratory), at Wayne State University, Detroit Michigan. Dr. Walker received the Outstanding Contribution Award from the Parapsychological Association in 2001.