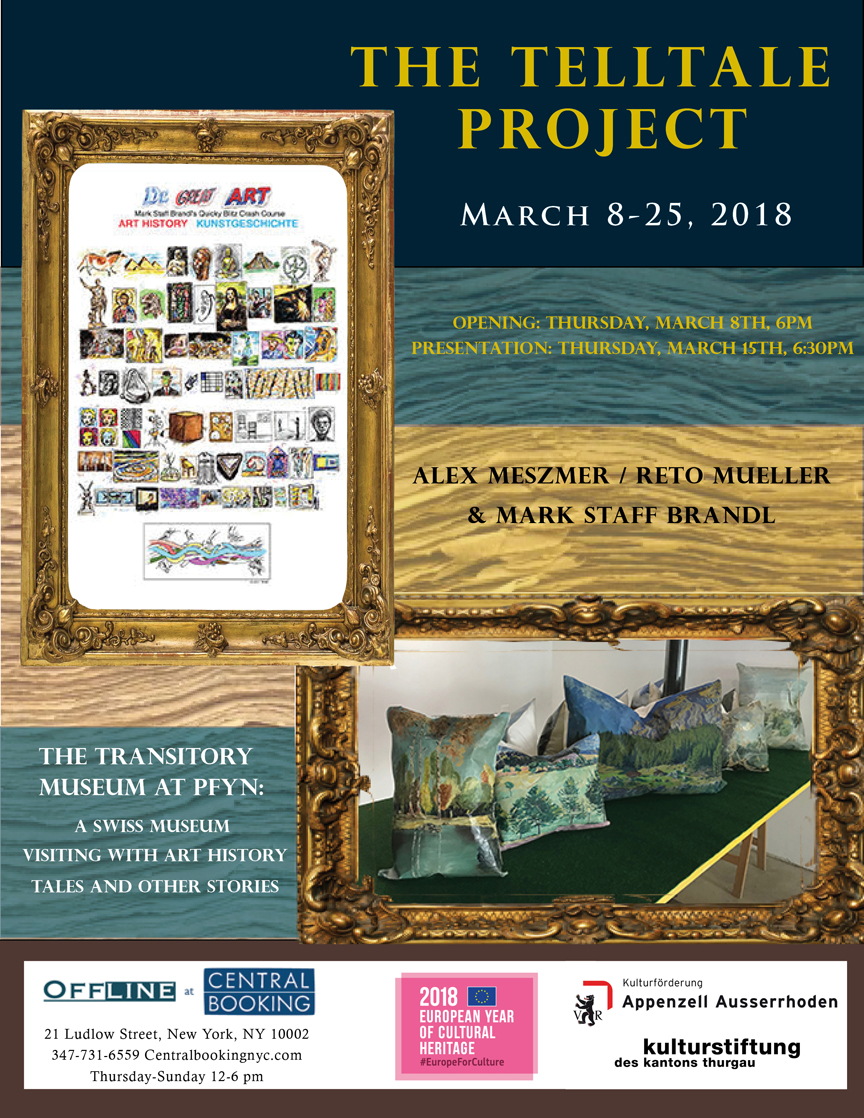 The Telltale Project is an exhibition in the OffLINE space, featuring the Transitory Museum of Pfyn. It will show art works by Swiss artists Alex Meszmer / Reto Mueller and Mark Staff Brandl consisting of a wall installation arrangement concerning the problems of the tales of art history by Brandl, and installations that relate stories about “Heimat/homeland” by Meszmer/Mueller; accompanied by artist talks and performance-lecture-evening.

‘Telltale’ has a variety of related meanings and can be translated in several ways. Telltale can mean a gossiper, a snitch or it can suggest that something is suspicious, revealing or has been exposed. It can mean a device or system which is an indicator, signal, or sign. “To tell a tale” means to narrate a story, one which could be a fable or a fairytale, perhaps even that the storyteller is pulling someone’s leg. Questions therfore arise: What is the truth? What is fabrication? Are these differentiations at all important? Isn’t a well-told tale more exciting than simple data and facts?

â€˜Telltale? as a term is also reminiscent of â€œtelling tall tales.â€ Tall tales are an important element of American folk literature, beginning with the obviously larger-than-life bragging contests in the frontier west, several made famous by Mark Twain. These stories concern unbelievable occurrences, related as if they were true, yet told with a wink. The exaggerations make it clear to the audience that the supposedly truthful narrator knows that they know he is lying for entertainment value. This brings to mind the far more pernicious notion of â€˜fake newsâ€™ being bandied about recently: lies spread in the media for propagandistic reasons, and even more appalling, the creators of those lies claiming them to be true while deceitfully claiming all actual facts and other opinions are the â€˜fake news.â€™

All of these meanings play into the artworks by Meszmer/MÃ¼ller and Brandl.

Stories and history have been the center of Alex Meszmer and Reto MÃ¼llerâ€™s art for years. The center of origin and vital reference point for the artists is the village of Pfyn and the house where the two artists reside; the house itself was built on the remains of the foundations of the ancient city walls of the Roman colonial castrum â€˜Ad Fines.â€™ They live in a house surrounded, even supported, by history. The ask themselves: how is history constructed? Who makes history? And what will remain in the future from us and our culture?

For The Telltale Project Meszmer/MÃ¼ller will further develop their installation No Fairer Land / Kein schÃ¶ner Land. This an installation of found landscape paintings refashioned into pillows with a soundtrack of songs of their homeland hummed by people of various nationalities, i.e. â€˜Heimatliederâ€™ as they are called in German. They will also be showing their Family Album / Familienalbum, comprised of manipulated photographs enabling different perspectives on gender relations or marriage for those in the past. Additionally, a video-installation of history and stories of Pfyn, Thurgovia will be in the exhibition.

Mark Staff Brandlâ€™s artwork revolves around a project concerning art histories (purposefully in the plural), their creation, reception and usefulness for us today. In performance-lectures and related installations and podcasts, he takes viewers and listeners on fascinating journeys through art and its history. Entertainingly, yet educationally and aesthetically he analyzes, and discusses the reasons why a work of art is great, or through entire eras, or indeed through the entirety of art history.

For The Telltale project, Brandl is creating a wall installation which centers on the history of art history. It concerns the often â€œmissingâ€ elements, people and cultures within it; and the creation of a more open, expansive, inclusive and self-critical model of art history and the teaching of art history. The piece includes two hand-drawn and painted visual compendiums of art history â€” one the more-or-less-standard one, the other all and exclusively women artists, both prehistory through Postmodernism. It also contains a hand-drawn braid-like image of a complex, intertwined model of the art history time line; several additional related prints; a book comprised of drawings representing holes in art history discovered while teaching it; and a sequential, comic-like object, presenting a tale concerning contemporary art and art history drawn on the backs of entry badges for Basel Art Fair, documenta, the Venice Biennale and the like.

Mark Staff Brandl, lives in Trogen, Switzerland and Chicago, USA. He received his PhD in Art History from the UniversitÃ¤t ZÃ¼rich for his dissertation Metaphor(m): Engaging a Theory of Central Trope in Art. His shows include galleries and museums in the US, Switzerland, Germany, Italy, Egypt, the Caribbean; specific cities include Paris, Moscow, Chicago, Los Angeles and New York. As a critic, he is a contributor to Londonâ€™s The Art Book, Sharkforum on-line, a podcaster for Bad at Sports, is Theory Editor for Chicagoâ€™s Proximity magazine and is a Contributing Editor for New Yorkâ€™s Art in America. Works of his have been acquired by the Museum of Modern Art in New York, Victoria and Albert Museum in London, The Whitney Museum in New York, the Museum of Contemporary Art in Chicago, the St. Gallen Art Museum, The Thurgau Museum of Fine Art, The E.T.H. Graphic Collection in Zurich, The Museum of Contemporary Art in Los Angeles, the International Museum of Cartoon Art, the Art Museum Olten and others.

Alex Meszmer, *1968 and Reto Mueller *1974 are an artist couple living and working in Pfyn, TG, Switzerland. Since 2006 they are working on public art projects in their local community, creating a digital archive about the history and the stories of the village, building a Transitory Museum and they declared their village cultural capital of Switzerland for 2011-12. They are using bible illustrations, photos, paintings, sound and objects as material for series of collages and as a basis for images and installations. Since 2014 they started a search for democratic beauty with their project club dÃ©sirer.