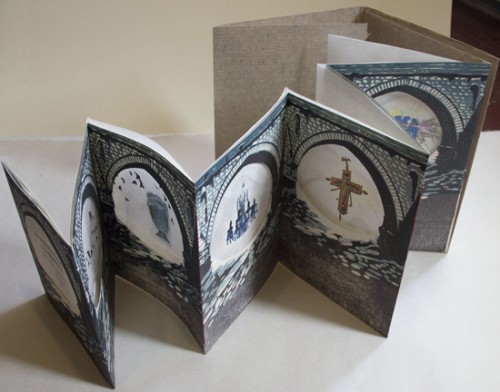 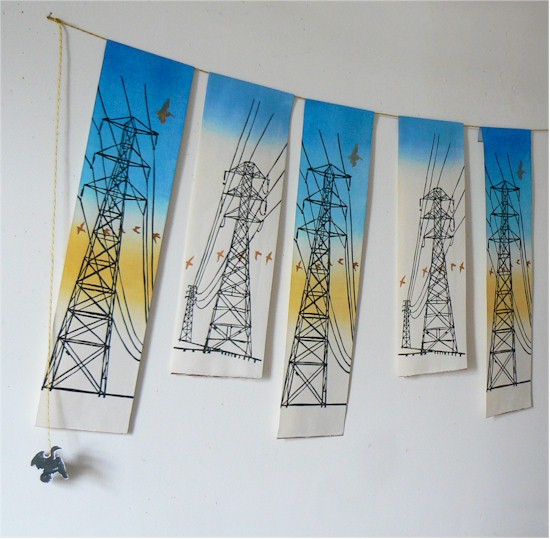 Although I consider myself mainly a printmaker, the work in this exhibition is mostly from a period when I painted in oil on shaped wood supports. This was the work that led into my work in Japanese woodblock printmaking. The supports were cut with a saber saw, and hung directly on the wall, where the printing blocks are carved in shallow relief and the shapes printed on paper. Birds being banded or tracked by radio, bats using echolocation or owls grabbing a tasty rat for dinner, the subject matter is consistent through all my work. It is a look at human beings’ equivocal relation with nature, measuring, testing, looking for patterns.

I use images of flowers, insects and other bits of nature in all my work, but fundamentally it is about finding order. This leads me to include human structures alongside natural forms, since I understand these to arise from the same impulse. In the etching “Counterfeit” I include moths with eye-spots alongside a Greek eye-cup that (not coincidentally) shows the same protective eye pattern. In “High Tension” birds circle around high tension electrical cables that energy from here to there. I suppose it is my way of taking control of these ubiquitous emblems of human power over the environment to string the towers on my own power line, like laundry.

Vollmer’s work has been exhibited in New York City, nationally and internationally. In 2008 she traveled to Belgrade, Serbia, for an exhibition of her woodcuts at the Faculty of Fine Arts. Each year she demonstrates Japanese woodblock printing at the Brooklyn Botanic Garden’s Cherry Blossom Festival. In 2007 she had a major exhibition at the Steinhardt Gallery there. Her prints have been exhibited at the Phillips Museum of Art, Silicon Gallery, AIR Gallery, the Islip Art Museum, and the Henry Street Settlement.

She specializes in traditional Japanese woodblock, often combining contemporary and traditional ways of working. She uses the computer to create complex patterns she transfers to blocks to cut and print by hand. She has taught the Japanese woodblock technique at Japan Society, the Lower East Side Printshop, Pyramid Atlantic, Dieu Donné Papermill, Maine College of Art, Anderson Ranch, the Hammond Museum, Frogman’s Print and Paper Workshops and many other locations. She has given lecture demonstrations at colleges including Hunter College, SUNY New Paltz, the School of Visual Arts and Union College. Her work has been published in the journals Science, Printmaking Today and Contemporary Impressions.