Animal Helpers of the Southwest: A Guide For Young Travelers, 2015 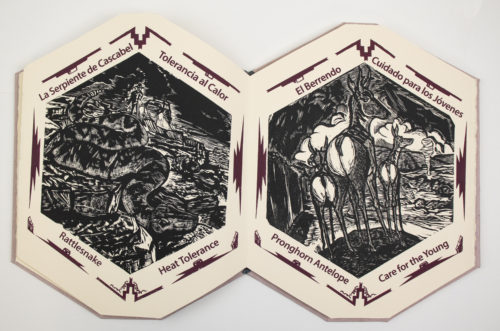 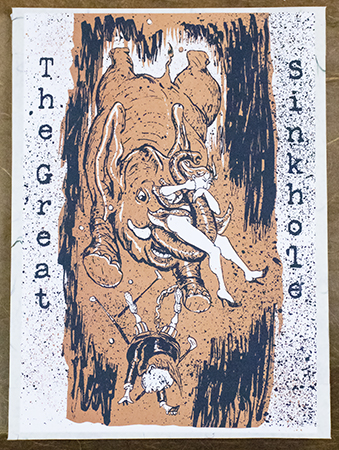 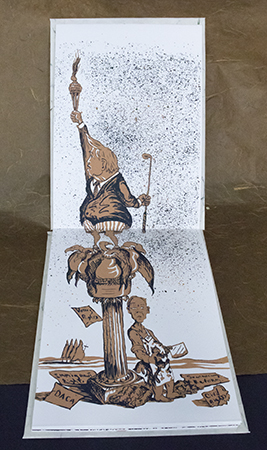 Tora Bora: An Opera in Three Acts, 2011
A foldout opera stage with screenprinted covers and six scenes printed from copper engravings. The scenes can be changed as a background for seven screenprinted puppets. A booklet printed letterpress with screenprint covers contains the storyline and lyrics. Tora Bora is the name of a mountain cave complex at the center of Afghan contemporary history. The CIA funded the expansion of the caves to help the Mujahideen fight the Soviets. The Taliban used them, and it was Osama Bin Laden’s last known address. Covers, Hahnemuhle Bugra; engravings printed on Lana Gravure; booklet body paper, Mohawk Superfine, Design & Staging by Klaus-Ullrich Rötzscher. 12.12 x 13.12 inches,  edition of 20. $2500 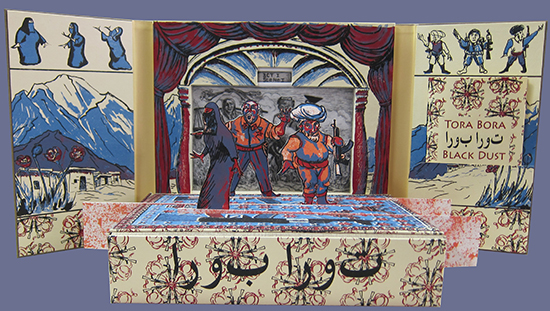 Pulcinella in Hades, 2006
Accordion fold book with removable spine that hangs from the loop. Four color sugar lift and spit-bite aquatint etchings printed on Hahnemuhle Copperplate paper. Letterpress printed in margins from handwritten text by 17 different people. Booklet with linocut print covers, explaining the text included. Pulcinella from the Commedia d’ell Arte is here a stand in for Orpheus or Christ in a comic harrowing of hell. Open 96 x 9 inches. Eight pages plus colophon, 13 x 15 inches, Edition of 20. $3000 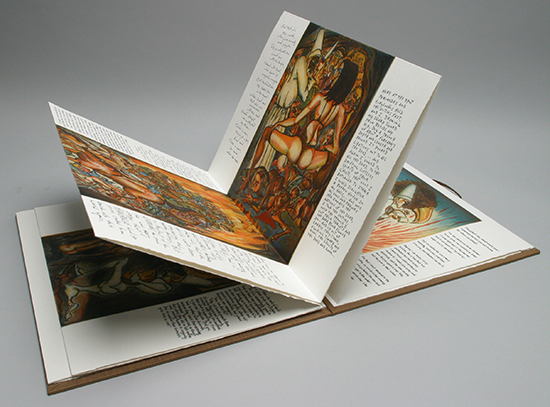 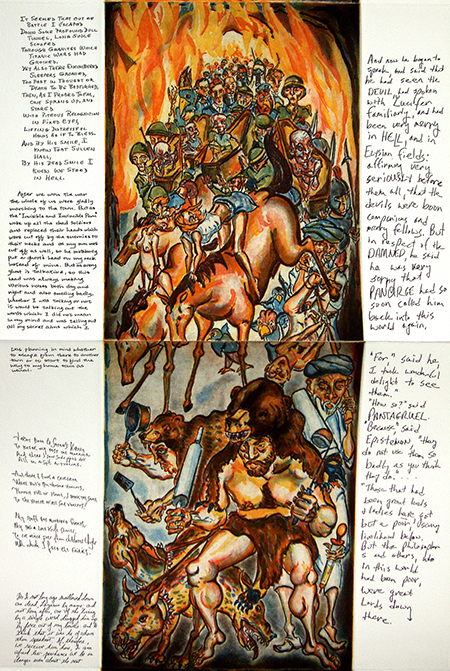 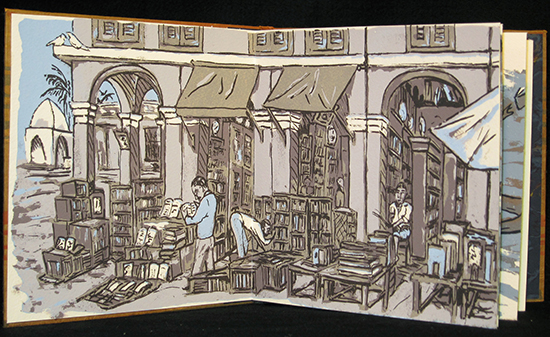 Candide or Optimism, 2008
Based on Voltaire’s Candide. The book opens to reveal Candide and Cunegonde kissing behind a screen of roses in the castle where they both grew up – “The best of all possible worlds”. When the accordion folds are pulled out a trail of disaster is displayed, and the concluding words, “but we must cultivate our own gardens”. Four color screenprint book, gate fold binding, hardcover, marbled endpapers, 13 pages, 12 .5 x 7.25 x .5 inches, body paper, Lana Cover White, open size 12.25 x 72 inches, number 6 from an edition of 15, $500 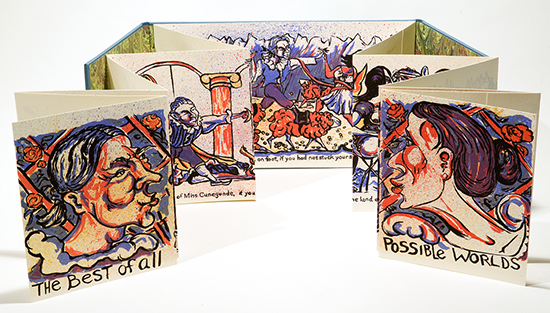 When I first started creating artists books in the late 1980s I had the thought of putting thematically linked woodcuts into a book form that would be greater than the single print. In 2000, I started working with print publisher Eastside Editions where I completed three artists books. These were the exact opposite of the woodcut books I’d created. These were ornate, colorful, large scale, and clearly driven by a literary line. The last of these is Pulcinella in Hades. The commedia dell’arte character descends to the underworld following a well-worn path of satirizing the afterlife. Marginalia texts from authors both ancient and modern describe multiple visions of Hades. This vertical accordion fold book doubles as an eight foot long hanging scroll.

The gatefold book based on Voltaire’s Candide opens to reveal Candide and Cunegonde kissing in “The Best of All Possible Worlds”. As the accordion folds are pulled out left and right a trail of murder, Inquisition, slavery and sea battles is presented.

The use of the book structure to tell the story moved to another level with Tora Bora: An Opera in Three Acts, a collaboration with Klaus-Ullrich Rötzscher who designed the book/opera. Tora Bora is a cave complex at the center of Afghan history. CIA, Mujahideen, Soviets, Taliban and Osama Bin Laden all had a role to play there. The opera consists of copper engravings and screenprinted backdrop and puppets on a fold-out stage. A libretto guides one through the scenes in an accompanying letterpress printed booklet.

Art Hazelwood calls himself an artist, impresario and instigator and sees these three roles as linked together. He creates art, organizes and curates exhibitions and works on social and political actions. His touring exhibition and book, Hobos to Street People: Artists’ Responses to Homelessness from the New Deal to the Present, represents his longstanding work with homeless rights groups in all three roles.

He studied at the University of California in Santa Cruz (BA in Art 1983) and spent the next ten years or so traveling in the US and Asia, living in Tokyo and in Vienna and teaching English. This internship on the road was the inspiration for much of his early artwork – seeing the world with the special vision of an outsider. But in the 1990s he moved to San Francisco where he learned to be more rooted and engaged in the life around him. His newfound political engagement manifested through exhibitions, street actions, and political poster campaigns on war, electoral campaigns, Occupy, immigration and poverty.

From 2000 to 2006 Hazelwood created work with the print publisher Simon Blattner at Eastside Editions including three large scale mixed media print books based on literary themes. The scale and complexity of these books lead some to consider them throw backs to the tradition of livre d’artiste rather than artists books. Among these books is Pulcinella in Hades. Hazelwood works in a broad range of print media, however his primary focus has always been relief prints. He has been a guest artist at several art schools as well as at San Quentin State Prison where he has collaborated on linocut projects since 2008. He began teaching printmaking at the San Francisco Art Institute in 2013. His prints and artist books are in several public collections: his prints calling for impeaching Bush are at the Whitney Museum of American Art, his criticisms of the Iraq war at the Library of Congress, many of his artist books on war are at Yale’s Sterling Library artist book collection. His prints on poverty and economic justice appear regularly in several West Coast street papers.