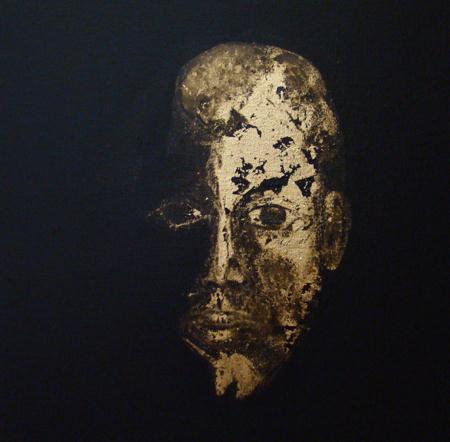 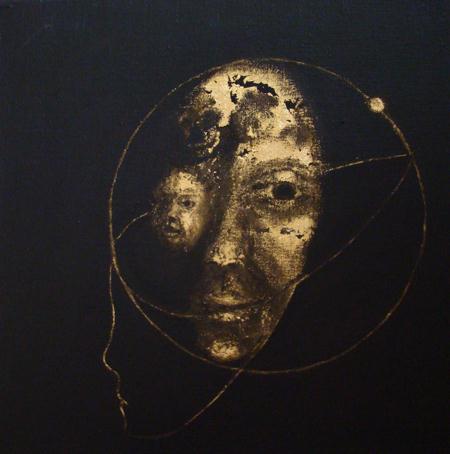 Man invents words to define things. Outlines or colours define a surface or reveal an illusion of space. Zero â€œ0â€ is the best example. A color inevitably related to an emotion, to a feeling, to a souvenir can be transformed, even
annihilated by another color. All colors together create the color black. â€œWhite is the total of all colors, it is divided by the spectrum of the rainbow; the black state of totality or the white state of capacity. As if in the incomprehensible everything is allowed, as if, in the state of freedom, the incomprehensible connects to the comprehensibleâ€. (M Serres)

The surfaces which reflect light (gold leaf) placed at random on a black background, invite our imagination to fill the void. The image is created but only partially. The incomprehensible rendered by the absence of seeing something, can accompany us on our path of wanting to know, which is the origin of the being. Braille puts the sighted and the non-sighted on the same level, invites us to see with our heart, â€œThat which is invisible, inaudible, impalpable, three conditions in which the essence is
undecipherable, which finally dissolves into oneâ€ (Lao-Tseu)

Engelmarie Sophie was born in East Germany in 1959 into a family of musicians. At a very early age she received a musical education with her brothers and sisters, thus growing up in an artistic milieu but heavily censured by the political system.

In 1977 she fled to West Germany with part of her family. In 1984 she immigrated to France where she has since lived and worked. She has persued artistic training in different workshops in oils, engraving, sculpture and stained glass.

Since 1999 she has exhibited in France, Belgium, Brazil, Germany, the USA.
Her art is based on the research of the being and its relation to music (silences, which are inaudible), literature (words which are impalpable) and the matter in her research to grasp the nodal point of the origin, the dialectic between the visible and invisible.