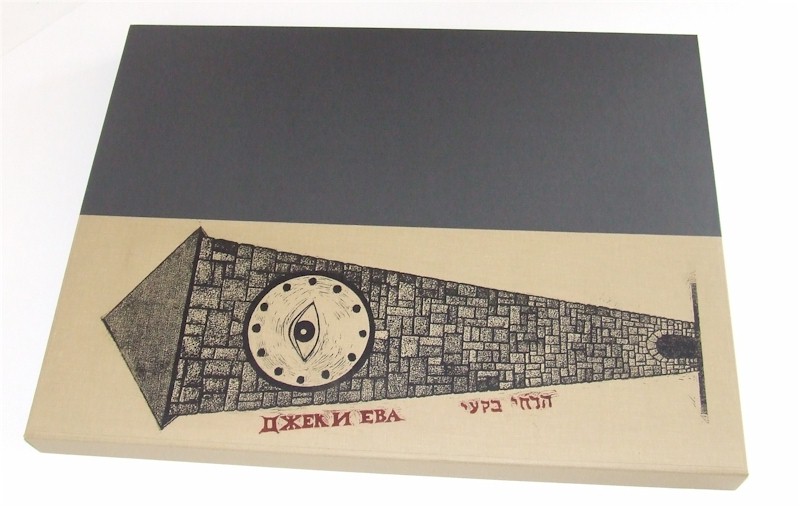 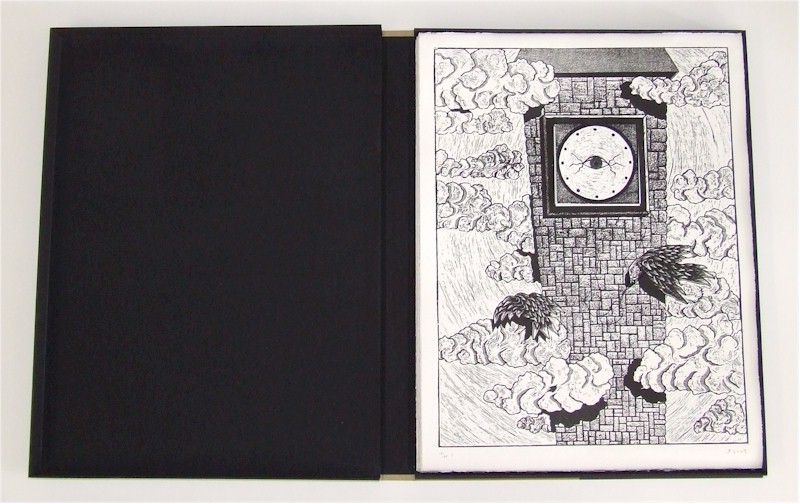 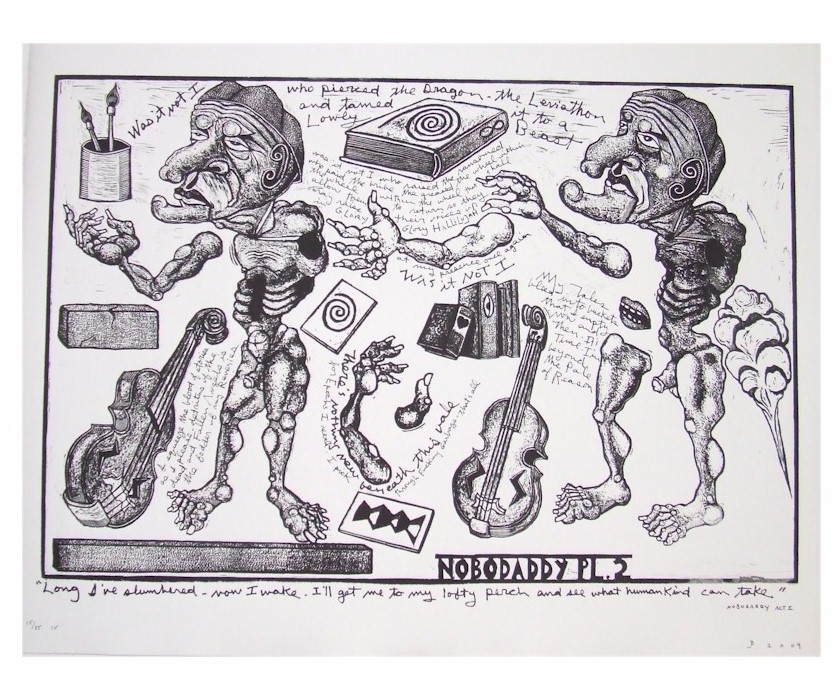 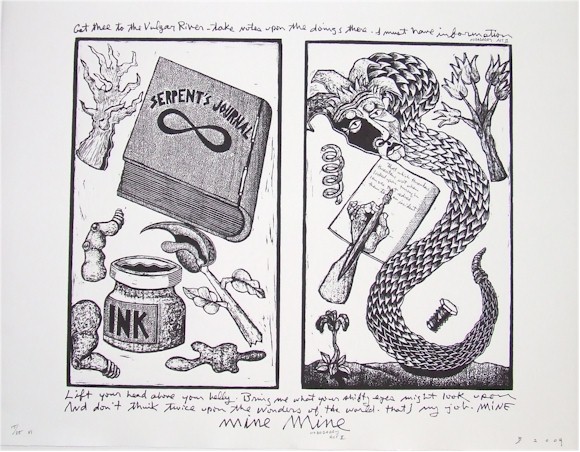 The Jackleg Testament, Part I: Jack and Eve Film Clip

â€œHe comprehended that the effort to mould the incoherent and vertiginous matter dreams are made of was the most arduous task a man could undertake, though he might penetrate all the enigmas of the upper and lower orders: much more arduous then weaving a rope of sand or coining the faceless wind. He comprehended that an initial failure was inevitable. He swore he would forget the enormous hallucination which had misled him at first, and he sought another method.â€ -Jorge Luis Borges, “The Circular Ruins”

It has been my method, over the past twenty five years, to investigate stories, incidents, thoughts (often from the Kentucky of my youth and imagination), by making series of pictures (mostly woodcuts) that attempt to fill the earthly plain with what I sense to be a dense state of object and thought (thought portrayed as object also), and then taking that imagery further – in one instance, by the making of a song cycle – another, into constructing and writing an opera in which the woodcut imagery became large mechanical sculptures interacting with humans on stage (titled Limbus, produced by the Opera Theater of Pittsburgh in 2001). I have chosen and stuck with the process of woodcut because of the way it stays on the page (somehow, even a word, when cut into wood, seems to have an achieved education – a right to exist).

This current project – the making of a woodcut motion picture – was arrived at by the wish to approach the woodcuts in a more direct manner – by using the woodcuts themselves to fabricate the continued work. In 1998-1999, I made a portfolio of 12 color woodcuts titled A Prehistory to that which is, By Mistake, called The Fall of Man: Jack & Eve. Jack refers to the mannequin inside of the toy called a Jack in the Box. He is chosen by a puchinello-like god figure as an appropriate companion for Eve. Jack cajoles Eve away from the steadfast, but doltish Adam. Jack and Eve travel down the Vulgar River to Nobotown, where they put on a performance in The Theater of the Western Regions. Disaster ensues.

In 2002, after researching the technical aspects of how one might make a woodcut motion picture, realising that I must start over again with woodcuts that extract the object from the picture plane (to be put back later in the making of the movie), I began drawing and cutting what I think of as a catalogue raisonee: every object that exists in Eden and the city called Nobotown – every architectural detail – the flora and fauna – body parts and clothing of all the characters, (etc.).

I have proceeded to make these parts into the sets, objects, and characters of the movie. They move by means of digital photography and motion graphics software that allows me to manipulate two dimensional objects in three dimensional space – compositing many layers of imagery to make up each scene.

In the movie, Nobotown is reigned over by Nobodaddy (named so in honour of William Blakeâ€™s name for the God of the Hebrew Testament). It is a time out of time in which Angels are a thing of the past (perhaps the future also, but not of the present). Nobodaddy, every few epochs, arranges for a play to be put on (in an attempt to get it right – reminding me of the Borges quote above).

The story of the original portfolio of prints has been expanded to include The Fiery Pit of Angels (where Nobodaddy fishes out Angel Detritus as props for his play) – the Chorus of Bums (inexplicably always present in Nobotown – they act as a Greek Chorus, however taciturn) â€“ Nobodaddyâ€™s office in the tall clock tower where he conjures all by using a deck of odd cards (and relaxes by playing the violin)- Jack and Eve building their little boat and their journey down the Vulgar River to the city – the Play itself, its consequences and Eveâ€™s banishment back to Eden – all looked over and messed with by The Serpent.

The clip from the movie is a work-in-progress version of a scene in Act I, where the Serpent first appears, and gets into mischief. Nobodaddyâ€™s violin is played by Paul Patterson.