Starling Stockpiling, 2008
Color-reduction woodcut, poodle/starling series. I am currently writing and illustrating a book about the migration of starlings from the UK to the US and how they became an invasive animal.
17 x 13 inches, Number 6 from an edition of 8. $500

Brown Booby and Brown Tree Snake, 2006
Color-reduction woodcut, invasive animal series. Brown Treesnakes are taking over Guam. They fall from telephone lines in the night and eat the eggs of most ground laying birds in the country. 17 x 13 inches, Number 8 from an edition of 8. $500 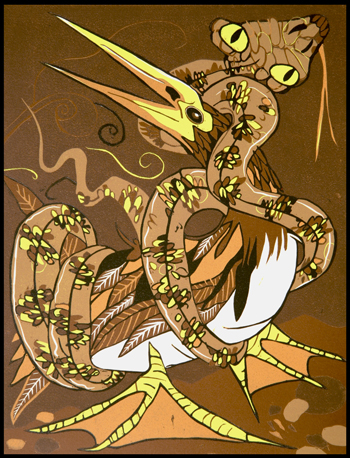 Rubber Ducky in the Last Frontier, 2008
Color-reduction woodcut, friendly floatees series. In 1992 a container ship full of rubber ducks, beavers, frogs and turtles fell into the ocean. The animals floated all over the world and because of serial numbers, scientists were able to track where they came from and learn a lot about ocean currents. 17 x 13 inches, Number 8 from an edition of 9. $500 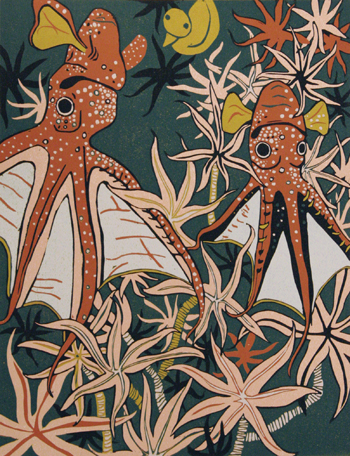 Jenny enjoys the company of animals in life and in artwork. Invasive, endangered and mythic animals uncurl from her imagination into the form of woodcut prints. Most of the works are ‘color-reduction woodcuts’ which is a process that is sometimes called a ‘suicide print’ because you cannot go back. She takes one block of wood and carves away are the areas she wants to white then she rolls up the block with the first color. After printing 10 she carves away the first color (on the same block) and rolls up her block with the second color. She does this until all she has left is the last color that was printed. The image can never be remade unless she were to carve a new piece of wood. They are very limited edition, not a typical Kinko’s reproduction.

Jenny makes artwork about animals and the environment because she believes that with education and understanding, people will learn to respect and attach importance to our own backyards and beyond. She hopes to inform about the natural world and become a voice for the creatures that do not have one so that information can bring stewardship and respect.

Jenny Pope lives part time in Ithaca, NY and part time in her car traveling to art festivals around the country. Her research interests include invasive animals, global warming band-aids, bird migration myths, islands and all things extinct and endangered. She is currently working on a picture book about the history of starlings from the UK to the US and how they became an invasive animal.