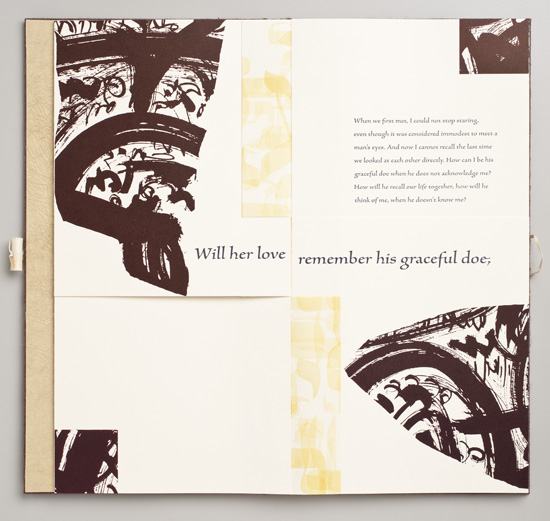 The Uncommon Perspective of M.E.J. Colter, 1992
Created as a tribute to a woman architect who worked at the Grand Canyon in the early 1900s. The body sheet, shaped like an adobe house, was specially made at Twinrocker using pumice from New Mexico, cooked straw and pulp painting. Three letterpress printed pamphlets, each titled using an architectural reference: Foundation, Locked Doors, Opaque Window, tell the story of the life of Mary Elizabeth Jane Colter, 11 x 30 inches open, number 66 from an edition of 100. $300 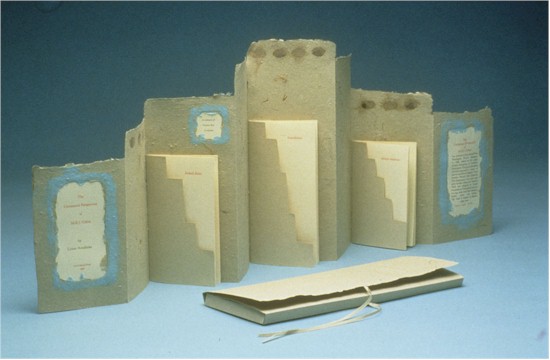 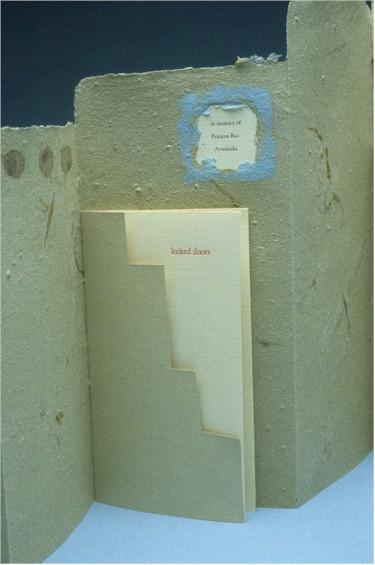 By A Thread, 2006
An imaginary conversation between Queen Ester and Scherezade; two women using language to save lives. Accordion with tabs, die-cut, printed color offset lithography at The University of the Arts, 8 x 8 inches, number 91 from an edition of 300. $350 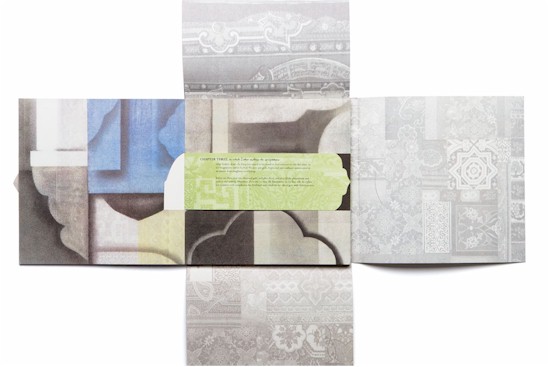 I am guided and inspired by the philosophical and physical presence of the book: as a vehicle for transmitting transcendent information, as a repository of memory and loss, as a singular object binding together a multiplicity of ideas.

Lynne Avadenka combines words and images, working in a variety of media. She was recently awarded a Kresge Artist Fellowship for 2009. Avadenka has received grants from the National Endowment for the Arts, the Michigan Council for Arts and Cultural Affairs and the Womenâ€™s Studio Workshop. Recent awards include The Dorothy Saxe Prize, a fellowship from the Memorial Foundation for Jewish Culture, residencies at the Hadassah-Brandeis Institute in Waltham, Massachusetts, The OberpfÃ¤lzer KÃ¼ntslerhaus, in Schwandorf, Germany and at the Virginia Center for the Creative Arts in Amherst, Virginia. She was a guest faculty member of Darthmouth College in the spring of 2009 and she has taught at the Center for Book Arts in New York, the Penland School of Crafts in Penland, North Carolina and the College for Creative Studies in Detroit.