Bronze Charm, 2007
Arches watercolor paper, 12 circles connected by 4 bronze-colored cords with bronze separators. The cords extend 30.5 inches from one end of the book so that it can be suspended and spun as a magic charm to entice errant lovers. The circles can be moved apart on the cords to make the text accessible. Each circle has a watercolor edge with text in the center. Circles are 8.375 inches in diameter, height of stacked circles is 1.875 inches to 2.25 inches, unique. $750 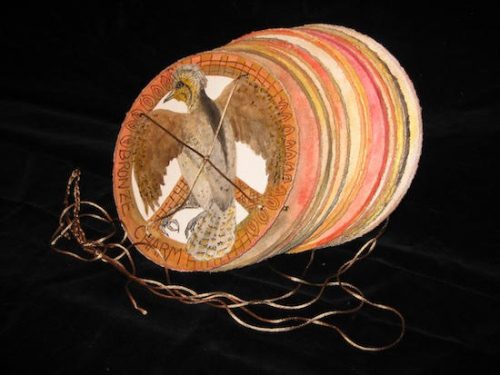 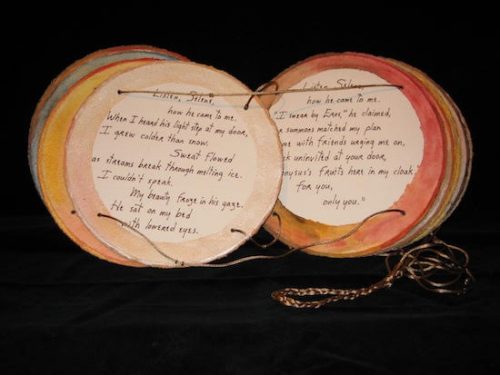 Marcia Scanlon’s artist’s books, a composite of her visual images and poetry; reflect her absorption in Greek mythology. Texts referencing Classic Greek and Roman art and literature are an abundant primary source that makes the book an ideal form for her mythical reinvention.

Io is one of several works exploring the founding myth of Io. This young nymph was a mistress of Zeus, who changed her into a white heifer to protect her from the uxorious vengeance of Hera. Pursued by Estrus, the gadfly, Io ranged through the borders of the known world, laboriously plodding a huge curve from Greece to Egypt, where she became the goddess Isis. The structure of Scanlon’s brief symbolist poem Io and the form of the Io book derive from the ancient Sanskrit ideas that the first syllable was born in the damp hoof print of a cow, and that the meters of Sanskrit poetry leading to the gods, can be found in the steps of cattle. This combines with the mathematical curve of her journey, arcing like the golden section. Images associated with the mythology of Io, as told by the Greeks, complete the poem. The white, loosely tied pages of the book move like the metered steps of the wandering heifer.

Marcia Scanlon grew up in Minneapolis, Minnesota. After receiving her Bachelor of Arts in sculptureand Master of Fine Arts in painting from the University of Minnesota, she moved to New York City in 1970. Scanlon now maintains studios in Soho, NYC, and in rural upstate New York. Her paintings, sculpture, prints, drawings, and artist’s books are in personal, corporate, university and museum collections from Hawaii to Cyprus. She has received commissions for corporate installations, has had several one-person shows, and has been included in gallery and museum exhibitions throughout the United States. Print studios in New York and Minneapolis have produced her monoprints and editions. She has participated in poetry readings in New York City and Larnaca, Cyprus.

Her early work in painting and constructivist sculpture explored the relationships among perception, memory, and narrative in serial formats. In this work she employed geometry and architecture, and eventually moved toward a pastoral setting for a rendering of animals that resists sentimental projections, instead embodying the alien character of the sensate world. Bringing all these elements together, she now uses a matrix of Greek and Roman mythology for all aspects of her creative work. Scanlon’s interest in mythology can be traced to a set of children’s encyclopedias, where the articles on art and myth were, to her, the most riveting. In college, upon finding that Greek and Roman concepts of visual form permeate formal art history, she began to note that, throughout American culture, elements of Greek and Roman architecture, sculpture, and painting have lent weight to political and educational institutions as well. In ancient Greek and Roman culture, chiefly mythology, she found an antidote to the unadorned Protestantism and pragmatism of Midwestern America. Her rediscovery of Ovid’s Metamorphoses was particularly influential on her work, both representational and abstract. For many years, her country neighbors’ livestock and the local fauna, as well as her friends and relatives, have entered into her reworking of mythology. Her union of ancient with contemporary images arises from the Greek and Roman myths now alive in her personal landscape.