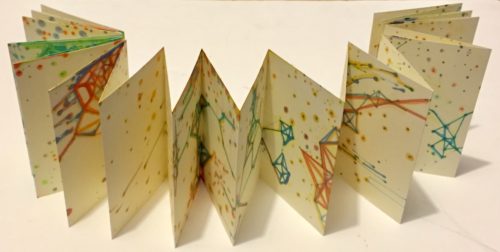 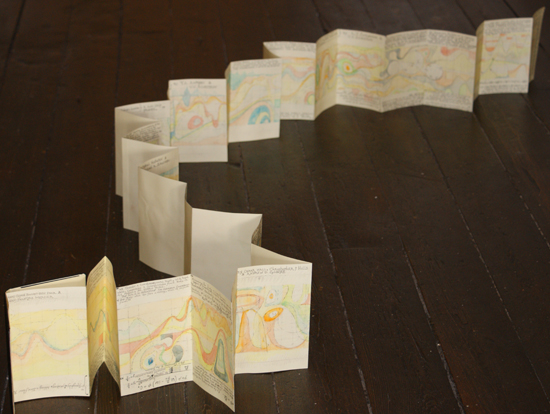 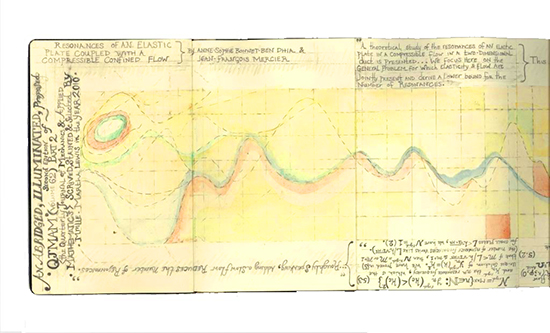 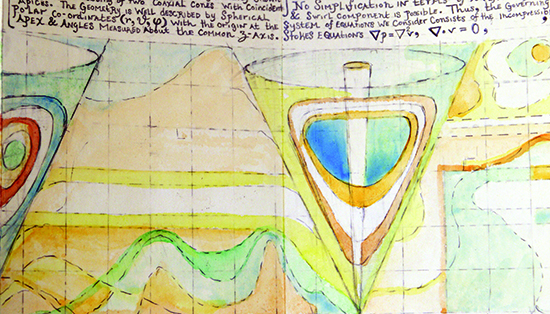 About the Branes:
The work shown here are unique 3-dimensional drawings. This series of crumpled objects have no ups or downs or right or wrong ways, they can be displayed in a variety of positions. They range in size from intimate palm sized versions to imposing ice-berg like masses.

The drawn mark, the ‘imagery’ is simply a mapping of the creases and volutes in the structures. It’s a revelation of pathways, making what is already there more evident. This is for me where the interesting part begins. I see these works as conceptual objects, a thought-model made solid, at once tactile and philosophical. These works refers to Membrane Theory in physics, which posits that our universe is part of a ‘bulk’ of branes. It attempts to explain how gravity, electromagnetism, strong and weak forces in the universe might be unified. Their complexity echoes that of many forms found in nature: mountain ranges, rocks, ice, insect wings. There is implied movement along with the aspect of the discarded, the frustrated, the abandoned idea. A crumple is the visual residue of a climactic event.

The Quarterly journal of Mechanics and Applied Mathematics: This book is a re-envisioning of the material in a published academic journal (QJMAM). My version of the journal became a hand drawn accordion fold notebook. All of the text and mathematical equations were selected from the articles in the journal, the imagery is derived from the diagrams accompanying the articles and melds them all into one streaming project. I then produced a printed edition of the notebooks, in keeping with it being a ‘journal’ and also to disseminate it more easily into the world.

My work engages issues of science, technology, and human knowledge. I am particularly drawn to our attempts to define, understand and construct our world.

I have become increasingly interested in the sculptural possibilities of paper works, and have been folding, cutting and crumpling them to enhance and distort the surface images. One work offers many variations, and is more portable as well, being able to fold into its own housing, or into a compact square for pocket carrying. This has considerably changed my ideas about how the works are viewed, how they function and are used. They become more involved in a relationship with the human body-as objects to be touched, handled, moved, not merely observed. This accordion-fold put is a manifestation of that interest, and the first of what I hope will become a series, of book multiples.

Martha received her B.F.A from the Cooper Union and her M.F.A from Yale University. She lives in the USA and Europe and makes works that often fold, roll, pack up or are otherwise portable to fit her peripatetic lifestyle.

Martha’s work has been shown at the Museum of Modern Art, in Oxford, UK, The Decordova Museum, in Massachusetts, as well as numerous galleries and exhibition spaces in the U.S.A and Europe. She is a 2010 recipient of the Connecticut Commission on Culture & Tourism’s Artist fellowship for works on paper. Recent exhibitions include the group shows Mind Sets at the Haskins Language Lab in New Haven, CT, Attract/Repel and Measure For Measure, both at CENTRAL BOOKING, and a solo show at the Luchsinger Gallery, Greenwich Academy, CT, titled: EXPLORATORY MAPPING VARYING IN UNCERTAINTY AND REDUNDANCY.

Lewis’ work is in the collections of Nuffield College, Oxford, The Boston Public Library and Chapman University, Orange, California where it is on permanent display in the library, as well as in private collections in the U.S.A and Europe.

She has taught drawing through the College Seminar Program at Yale University, and at Columbia University, and was a 2011 Visiting Artist at Hartford Art School’s painting department, The University of Hartford, CT. She is currently Educational Curator at Artspace, New Haven. Her curatorial projects include: SCRAWL: a large-scale collaborative exquisite corpse drawing project that spanned the walls, floors, and windows of the galleries at Artspace, New Haven, and included over 22 Artists and teams, in 2011. In April, 2009 she curated the exhibition Yarn Theory at PS122 Gallery in New York, which featured knitted and crocheted models, structures and objects created by artists, mathematicians and scientists. Martha’s work is also included in the Flatfiles at Pierogi 2000 in Brooklyn, NY.