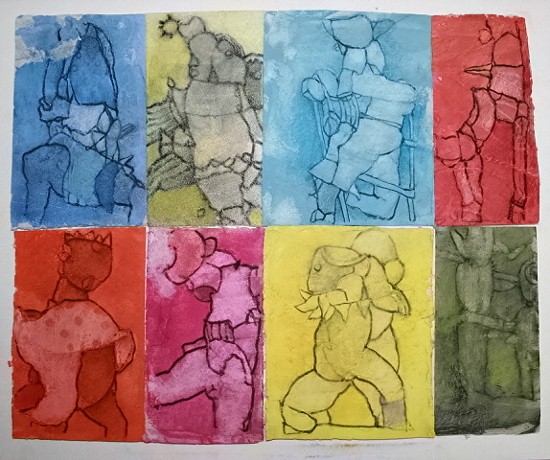 The organization in sequences in many of my works is something that came as a natural thing very early in my paintings. Intuition through improvisation provided me with numerous images ready to interact with others images to generate an evocation of the narrative. What interests me most is the process of getting to these images and the final discovery of something unpredicted revealing the nature of the mysterious when they become visible.

Rafael Mundi was born in Caceres, Spain in 1948. He spent the first years of his childhood in Barcelona and a decade later returned to Caceres where he attended school. Drawing was the subject he preferred to any other. At age of 14, his family moved to Madrid where Rafael continued to study and realized he would never want to do anything other than art. Spain at that time was not an ideal place for an artist, it was a society controlled by a fascist regime and separated from the rest of the world by a cultural void.

He moved to London in 1966 where he worked and attended evening classes at Central School of Art and eventually studied painting at City and Guilds School of Art. He travelled over Europe and returned to Madrid in 1986 where he started to teach and from 1987 had regular shows in Spain and participated in Art Fairs like Art Basel Edition, Saga Paris, Art Chicago, Arco Madrid, and Art Lisbon.

His works are at the Museum of Contemporary Art, Caceres and in numerous private collections in Spain, Europe and America.