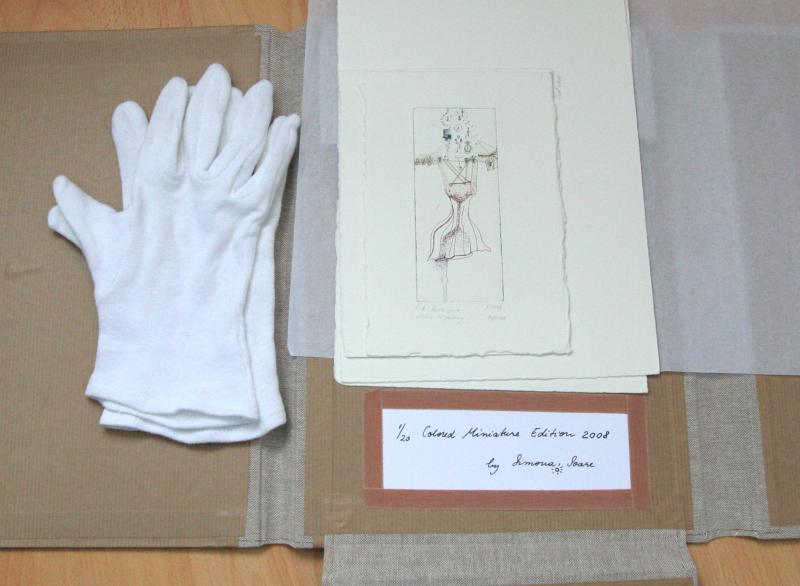 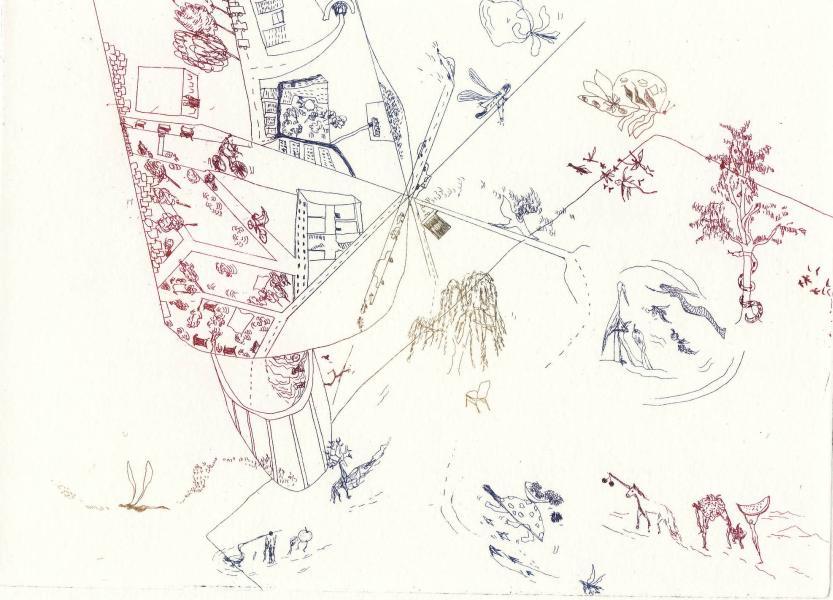 Following traces of personal memories, cultural dialogs, the play of absurd situations, that are present in everyday situations, literature texts and images, I try to tell stories, using contemporary and mystical symbols. My dialogs are visual and integrate my passion for hybrid forms and for physical migration, by gathering different cultural and formal patterns from the Easter European countries (Romania, Czech Republic) and the Western European countries (Germany, Finland, Holland, Italy), where I used to visit and which inspired my work.

From wallpainting, paintings, printed graphics to interventions in public space, performance and installations, I have explored possible ways to express each of my ideas into techniques, adequate to my artistic vision. Therefore my actions have always a very personal touch, which is not based so much on established rules of representation, but more on my inner vision of reality. For example, I brought linocut prints into a public art context – in the project “Landscape Traces”, 2007. Here I have made a print of manholecover from Alexanderplatz, Berlin, and transformed it into an urbanistic architectural context in Seinäjoki, Finland.

I experimented also with extreme formats of the artwork, like monumental printed etchings of 5m 30 cm, which resulted in complex compositions, in octagonal serial scenes. Also I explored graphic as a precious micro-universe, by making miniatures with the loupe, etchings, which are supposed to draw curiosity and attention for details and histories. The minimalist figures are almost hard to be recognized, at the sharp border between visible and invisible, but maintain a strong dynamic of the forms and details.

Throught my art, I want to create a new world, a refuge for the viewer. An abstract space is home to bizarre and absurd situations and opens into a new fantastical world. I try to see how spaces can be transformed, how a parallel magical world can be created , twisting the perception of a scene into an absurd, surealistical story. (think: “Alice in Wonderland”). Black humor and the absurd literature and philosophy (Lewis Caroll; Eugen Ionescu, Kafka) are some sources for my art.

As a young Romanian artist living in Berlin, I see myself as part of the creative melting pot growing across the boundaries of the former iron wall. Inspired from my educational and experiential backround, I am aiming to combine the traditional art techniques with conceptual art forms. My specialization in mural painting in Romanian determined me to deeply immerse into the religious and mystical world of medieval art. I keep this passion for the symbolism of correspondences, which, together with contemporary elements, shape my art to the current day.

With a diploma degree in arts from the National University of Fine Arts in Bucharest, Romania, 2003, I went through a traditional art education of a south-eastern European country. After winning an Erasmus stipend in 2003-2004, I joined the Kunsthochschule Berlin Weissensee in Berlin, Germany. In this new environment I encountered the minimalist and very graphic style, which dominates much of my later printed work. Supported with a study schoolarship from Rosa Luxemburg Foundation I took a degree as Master of Fine Arts, Art in Context from the Universität der Künste in Berlin 2007. In 2007 I received an Artist Residency Scholarship from the Nelimarkka Museum and organized an exhibition and performance “Jurnal/Who stole the Sun?”. During the same residency, supported by Varikko Galerie I realised the projekt, “Landscape Traces”.

My current projects are participating at the Balkan Contemporary Art Festival in London in Sept 12, 2009, in Berlin, Sept 2, 2009 in the Interkulturelles Frauenzentrum with Arbeiten auf Papier and in New York, Narrative Sequences curated by Maddy Rosenberg, Exhibition in Center for Book Arts, in January 2010. Besides my active work as an artist in Berlin, I was actively engaged to facilitate the cultural exchange between German and Romanian artists and in 2006, in a project curated together with Marta Jecu, a major bi-national series of exhibitions called Fluidic Project.