El que vive de ilusiones muere de desengaÃ±o. (He who lives with illusions dies of disenchantment.) , 2015
A collaboration with Cubans ages 12 to 77 reflecting upon the changing relations with Cuba and the United States.
34 x 13 inches open, 13 x 4 inches closed, Silkscreen on a 1979 Cuban atlas with text digitally printed on Thai Unryu, and Japanese Yatsuo paper, Whirlwind binding with Kyoseishi Sora paper, Edition of 6 with 1 artist proof. $2400 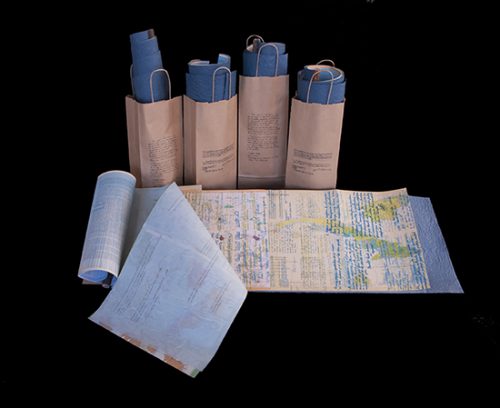 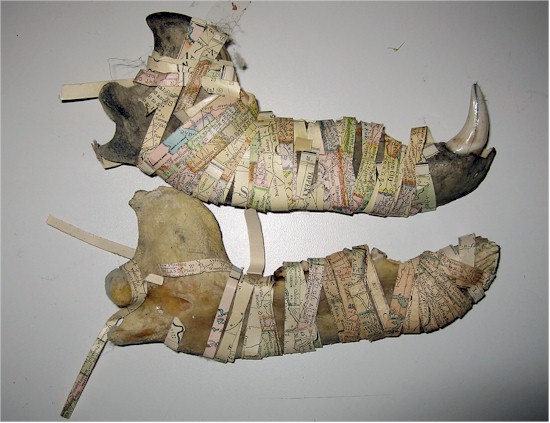 Cuba is difficult to grasp as a foreigner and for Cubans it is often a mystery. The Chinese whirlwind binding of El que vive de ilusiones muere de desengaÃ±o is a book structure perfect for the island of Cuba. When rolled it presents concentric circles reminiscent of the hurricanes that sweep over the island and when opened layered information is revealed. The 1970â€™s Cuban atlas pages are screen-printed with illegible text that moves from the dark blue of deep water to light green of shallow water at the beach, pushing the flagpoles adjacent to the U.S. Embassy against the spine of the book. These flagpoles were raised in 2006 to protest the U.S. policy against Cuba during the G.W. Bush administration. The palimpsests of faint snapshot images create an ambiguity of vision. Layered between these pages are the printed text to two questions asked of Cubans ages 12 -72 in January 2015 shortly after opening of relations between Cuba and the U.S. What are your expectations for the future? Do you have any concerns with how the U.S. and Cuba can work together? The answers range from apprehension in the eldest to a desire of a 12-year old student ready to meet the world.

Steven Daiber is the son of two biologists and a perpetual student of nature. Most of his life, when not in school, was spent on the Delaware seashore collecting specimens and assisting his fathers’ research. He has spent his life collecting, dissecting and drawing the animal and plant life around him.

Daiberâ€™s professional work as an artist originated with training in drawing and painting. He has worked with books for more than fifteen years. Some of his most recent work as a book artist reflects the influence of annual trips to Cuba for over sixteen years, Red Trillium Press (Steven C. Daiber) has had the good fortune to work in printmaking studios in Hanoi, Vietnam and Havana, Cuba.
As a result, his first-hand knowledge of the United States and Cubaâ€™s troubled and intertwined history empowers and contributes a sense of urgency and purpose to Steven Daiberâ€™s work as an artist. The individual books and book collaborations with Cuban artists, created during and after visits to Cuba, tell stories of Cubansâ€™ lived reality in the twenty-first century in juxtaposition to Daiberâ€™s acute observations as an outsider contemplating individual Cubans caught in the politics between their nation and the United States.
The goal of these book projects has always been to share a perspective on lives viewed from the periphery, lives in which Red Trillium Press has been able, through fate, to begin to enter and engage.
Daiberâ€™s recent trips to Havana in 2010 â€“ 2017 included teaching printmaking, books arts at San Alejandro Academy of Art and book collaborations with Cuban artists. Poder created in 2010 is the first book in the trilogy Cronica insular, based on themes Cubans artists feel describe their social and political relationships: power, privacy and waiting. These ideas developed during a number of meetings and conversations in 2007 with the artists. The second book Privacidad was created in 2011 and the third book La Espera in 2013.
Daiberâ€™s professional work as an artist originated with training in drawing and painting, with a M.F.A. from Cranbrook Academy of Art in 1981 and a B.F.A. from the University of Delaware in 1978. His books are in the collections at MoMA, Cuban Heritage Collection: University of Miami, Stanford, Yale, The British Art Museum, and the Museo National de Bellas Artes, Havana, Cuba to name but a few.