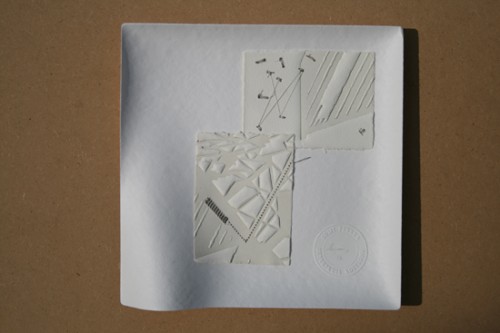 MORE LINES EXPLORING SPACE, 2013
Etching, aquatint, embossing, pencil and stitch on Somerset paper 300g, cut letters. Paying homage to both Arabic and Western reading practices, the book can be read in a boustrophedon fashion, either right to left or left to right. Lines reduce in number read in one direction and build-up read in the opposite direction. 8.25 x 3.75 inches(folded book), variable edition. $500 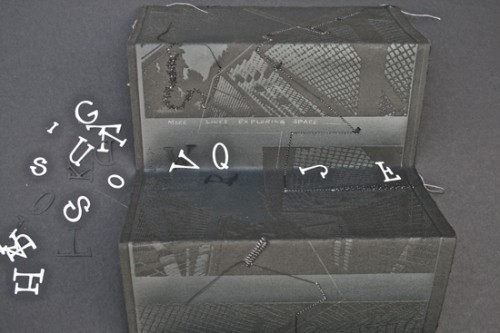 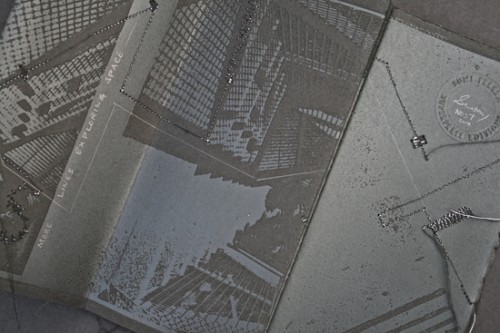 CLOTHES ENCOUNTERS IV, 2008
Etching, aquatint, embossing, stitch, perforations and incision on Somerset paper 300g. This book addresses the seen and unseen forces of the clothing industry. There are multiple readings throughout the book, similar to those that exist within the hieroglyphics that evolve within encounters with clothes. A detachable spine allows the book to be undressed to convert the ‘codex-like’ format to a concertina. 5 x 102.5 inches, variable edition. $2000 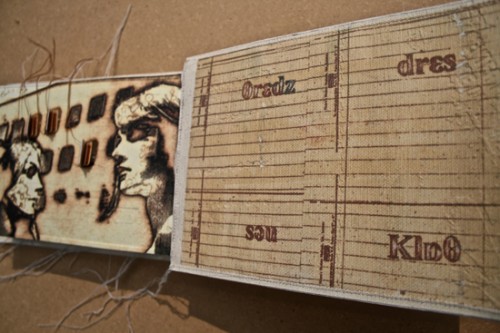 Etching, aquatint, embossing and stitch. Thirty pieces of silver are featured in this coin album, a soon to be obsolete book-form with the decline in interest in both collecting and using coins. This ‘codex’ like album converts to a leporello form by the retraction of a detachable spine, allowing the transition from a private to public reading. Housed in a box with a magnetic lid and an etched zinc plate featuring 30 coins [from the sheckels used by Judas Iscariot to betray Christ to modern international currency] 6.5 x 5 x 1.25 inches, variable edition. $3000 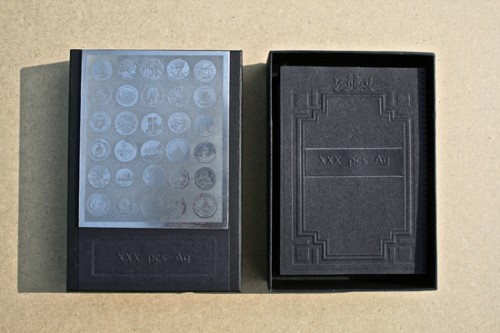 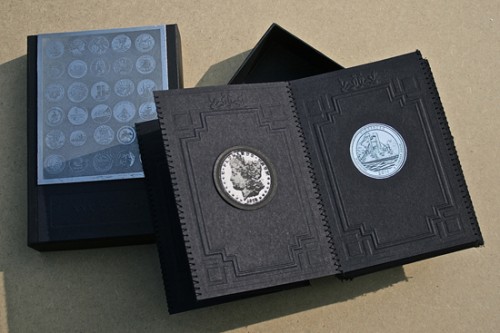 SHATTERING THE GLASS CEILING II, 2013
Etching, aquatint, thread and layering of cut outs on Somerset paper 300g. This work symbolizes dream-thought, the dream content and its translation through multiple layers. These blocks may be placed vertically, horizontally and rotated to any alignment, “The dream-thoughts and the dream-content are presented to us like two versions of the same subject-matter in two different languages” [Sigmund Freud]. 6.25 x 8 x 1.25 inches, variable edition. $2000 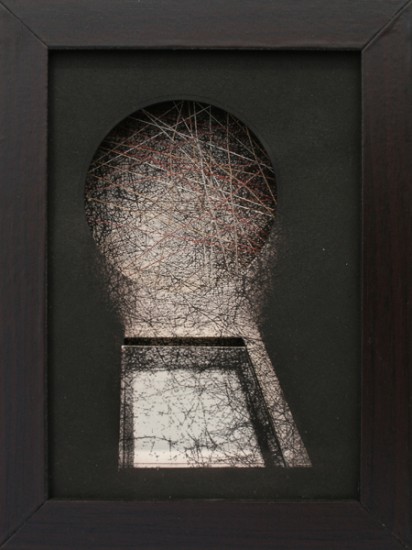 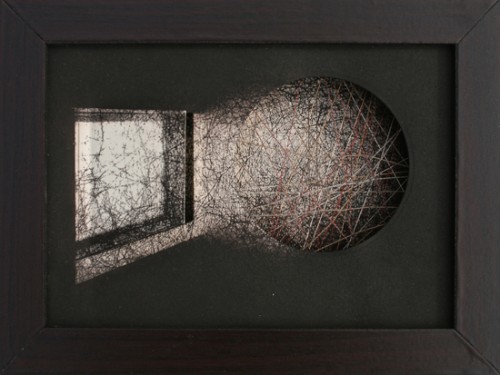 SHATTERING THE GLASS CEILING III, 2013
Etching, aquatint, thread and layering of cut outs on Somerset paper 300g. This work symbolizes dream-thought, the dream content and its translation through multiple layers. These blocks may be placed vertically, horizontally and rotated to any alignment. “The dream-thoughts and the dream-content are presented to us like two versions of the same subject-matter in two different languages” [Sigmund Freud]. 6.25 x 8 x 1.25 inches, variable edition. $2000 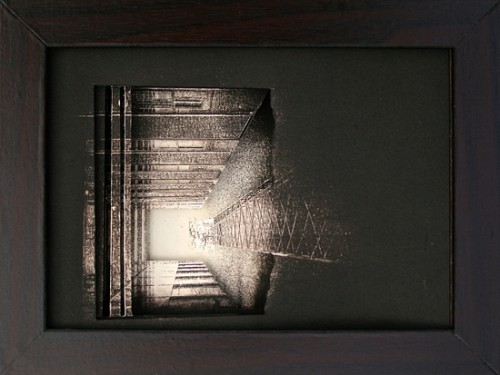 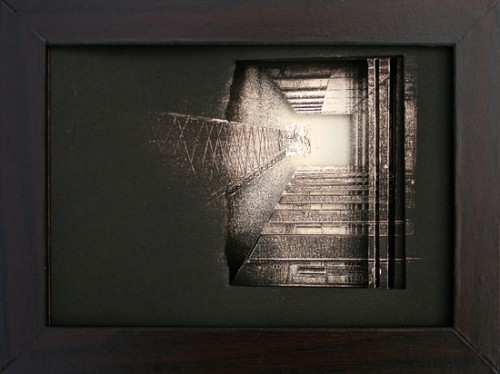 Sumi Perera’s bimodal status as a Sri Lankan émigré and British citizen informs her multidisciplinary practice, an amalgam of influences based on her training as an artist, scientist and doctor. Her work reverses authorship, through interactive prints, artist books and installations often inviting the viewer to re-configure the sequence. Traditional techniques of mezzotint, lithography, etching, aquatint, drypoint, sugarlift, chine collé, monoprint, collagraph, embossing, screenprinting; are harnessed to computer numerical controlled methods such as laser cutting & laser engraving; and often stitched and incised to form mixed-media assemblages.

Process is as important as the product. Each prototype of a series leads to several variations on the theme, generating open numbered variable editions. Often the reader/viewer is asked to inscribe/erase, add/subtract, change the sequence, the alignment and devise multiple permutations, oscillating between the vertical and horizontal planes.

BUILDING BLOCKS BOOK is an ongoing series of artist books and installations investigating how the human body occupies space inside and outside of the built environment. LINES EXPLORING SPACE OUTSIDE THE BUILDING BLOCKS is a hybrid of the above series and another work titled: Lines Exploring Space.

Often loose visual and textual fragments accompany the works to enable re-editing. Her most recent project, a universal collaborative artist book scroll titled WORK IN PROGRESS [a tribute to James Joyce’s Finnegans Wake] is a touring interactive installation of blocks. Single units and modules of two and ten were exchanged via mail between artists. During the installations, viewers were invited to type and intervene at each venue.

Perera worked as a doctor in Sri Lanka, returned to UK for postgraduate studies (MSc & MPhil) in Virology and worked at London School of Hygiene & Tropical Medicine. In 2003 she completed a MA Bookarts at Camberwell College of Arts, University of London. She taught at the Central Academy of Fine Art, Beijing 2007 and curated a show: 15 to 1 touring internationally to 12 venues.

She is a fellow of the Royal Society of Painter-Printmakers and the Society of Designer Craftsmen and a member of the Society of Graphic Fine Art and the 62 Group of Textile Artists. She lives and works in the UK.