Town`s voyage,2015
One of the first science fiction stories was written by Cyrano de Bergerac in 1657. He wrote about his trip to the moon. On this planet the houses were able to change their places. Quotations from Cyrano de Bergerac: Mondstaaten und Sonnenreiche, 1657, 7 papercuts, 7 pages of letterpress (languages: English, French, German), Japanese binding, in special handmade box, book: 14 x 10 x 0.4 inches, box: 14.2 x 10.6 x 0.8 inches, edition of 25. $990 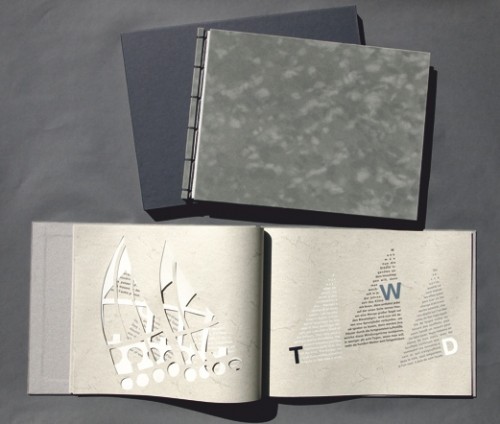 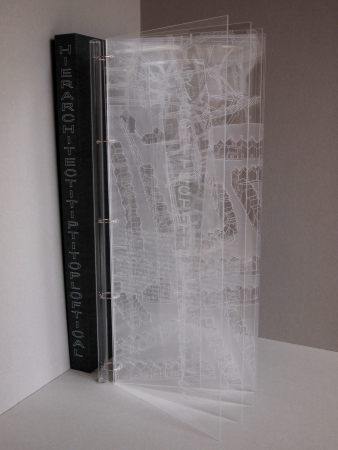 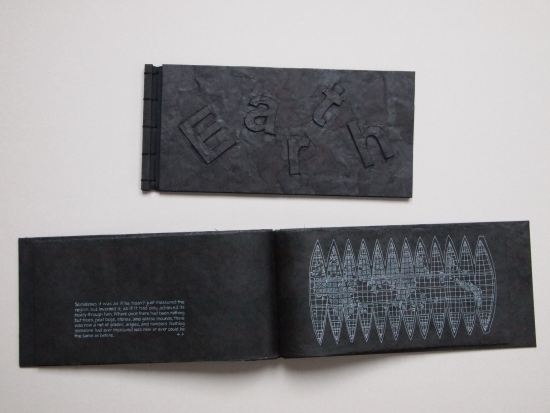 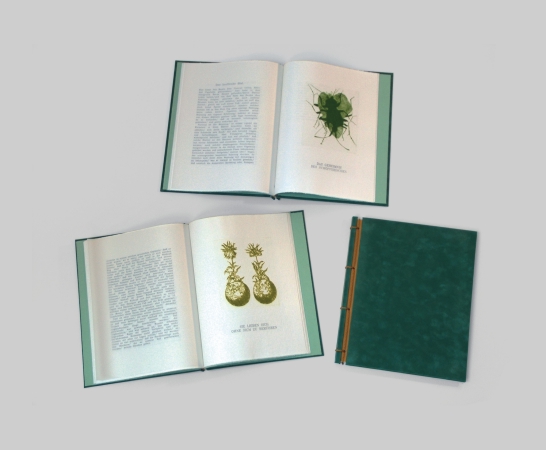 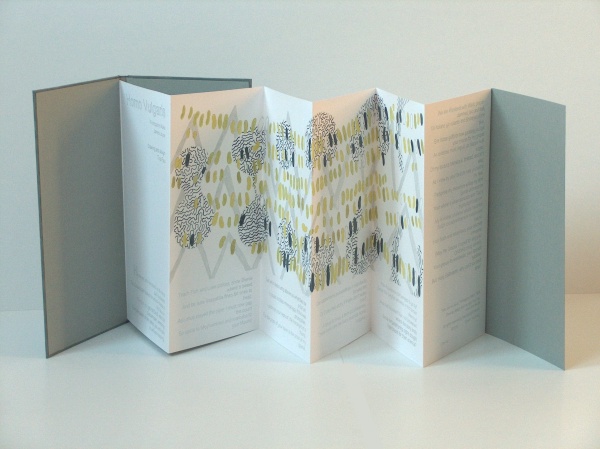 Homo Vulgaris contains a handwritten poem from James Joyce, Finnegan’s Wake, as well as a 4-sided, color original drawing. The artist book makes a direct reference to this poem but also to “Finnegans Wake” as a whole: the musicality of the language, its ambiguity as well as the complexity as regards content. Irritation, strangeness and lack of understanding also play a role in this. Therefore it is a book with currency.

Relationes Curiosae: Between 1683 â€“ 91 E.G Happelius wrote his magnificent book Relationes Curiosae, great memorabilities of the world….. It contains an extensive collection of baroque early scientific texts, which also bear a direct relationship to the idea world of the miracle chamber / Wunderkammer. For a choice of texts referring to nature, Tina Flau created  emblematic etchings as well as a suitable book design.

The Ã„uÃŸerliche Gestalt der Erden (external shape of the earths) describes the baroque early scientific acceptance in word and picture that the earth must gradually change into an oval shape due to the many snowfalls at the Poles. The material of the book is transparent in keeping with the theme of ice and water, that become white snow. The scratch drawings are worked by hand into the synthetic foil.

Print series Mikrokosmos
The series of 33 color gravure prints takes up directly a baroque art form, the emblem. An emblem consisted of several parts at that time: a motto as well as from a pictorial representation, the icon, and often a shorter, poetic text, epigram. These elements often created tension in their relationship to each other and encode a complexity that belies simple interpretation. These emblems of the artist show motto and icon, and picture and motto also refuse an easy interpretation. The mystery forces us to look again and invites us to establish our own connection between picture and motto. As in the case of the miracle boxes there is no fixed solution, no axiom; the openness of the emblems rather allows personal and diverging interpretations of the viewer.

Print series BalkoNo
The 4-part series of etchings deals with the airy appendages of the town halls. These are permanently in danger from weather and aging.

Print series Welten (Worlds) deals with objects of our everyday world. Clear forms and subtly differentiated structures appear in blue or red tones. In the fullness of the possibilities a reduction brings clarity and determination despite ambiguity. The series has grown over the years and  currently consists of 57 prints.

Artist book award of Neues Kunsthaus Ahrenshoop / Land Mecklenburg-Vorpommern
Since 1996 artist books and book objects are made as unique or in small editions, they usually arise with contemporary texts as well as with an original graphic reproduction or drawing. Partial the paper is self-created and the document is partial handwrittenly or in the hot-metal setting. Printing and bookbinding are carried out in a workshop of their own. The object like book covers, the special color gravure printing as well as a conclusive putting into action of the respective book topic are classified as extraordinary. Till now there are 24 artist books realized as well as extensive series of graphics and drawings. Garden art and installation also finds there place. Numerous exhibitions and purchases at home and abroad.