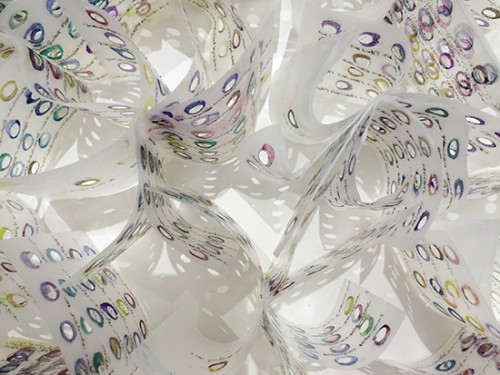 My fingerprint series revolves around identityâ€”typing and categorizing people into groups and subgroups within society. For all their apparent individual information, fingerprints tell us nothing about age, race, incomeâ€”or anything else. I am interested in bringing humanity back to the fingerprint and reclaiming the fingerprint as a stamp of ownership or creation. People have used fingerprints for mark-making since the earliest recorded days of civilization. Yet fingerprints today are far more likely to be used for marking others.

I have been working with fingerprints since 1998. I began with journalsâ€”which I still makeâ€”and continue to experiment with varied media and modes of presentation. The series is a reaction to the disparity between societyâ€™s marginalized and privilegedâ€”in law enforcement, health care, housing, banking, economic opportunity, etc. Institutions of power demand identificationâ€”signatures, photographs, and fingerprints, filed away in databases and vaults.

Unlike the stark blackness of the fingerprints collected at crime scenes and held in those databases, I show my fingerprints in a multiplicity of colors. I make every print with my right index finger and record the date beneath each one. I have fingerprinted paper books, sheets, and rolls, as well as acetate, mylar, plexiglass, stones, seashells, and glass.

Diversity. Variation. No two prints are the sameâ€”whether from different people or from a single individual. In my work, the colors vary, the shapes vary, and the pressure used to make the print varies.

Valerie Huhn moved to the New York City area to pursue a life of art and education at The New School â€“ Parsons and the School of Visual Arts. She then moved west and completed her BFA and MFA degrees at the San Francisco Art Institute, where she was awarded a Sobel Scholarship.

Valerie works in a variety of media from photography and video to mixed-media to sculpture and site-specific installation. She has taught classical and advanced techniques in photography to pre-teens, teenagers, and college students.

Valerieâ€™s work has been shown throughout the United States and internationally. Residencies include time in Long Beach Island, NJ and Aspen, CO. In 2014, she won studio residencies at Aferro Gallery in Newark and chashama in New York City. Her work is in the MoMA Books Collection as well as private collections. She has won numerous awards, including several for her recent fingerprint work, which continues to provide her with new material and ideas to explore.