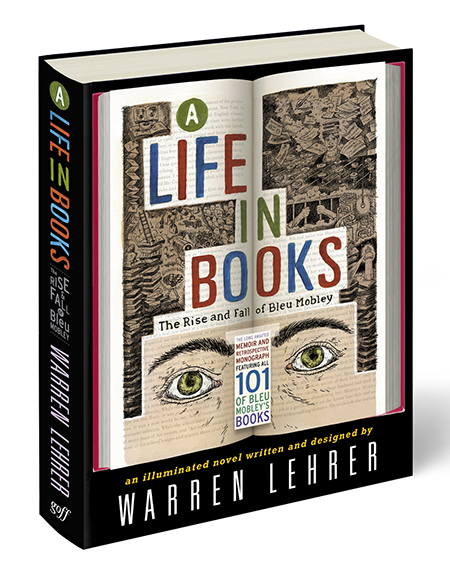 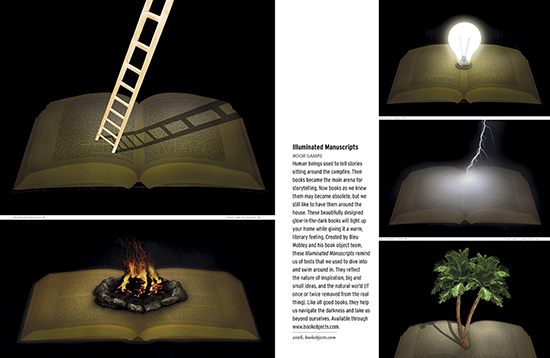 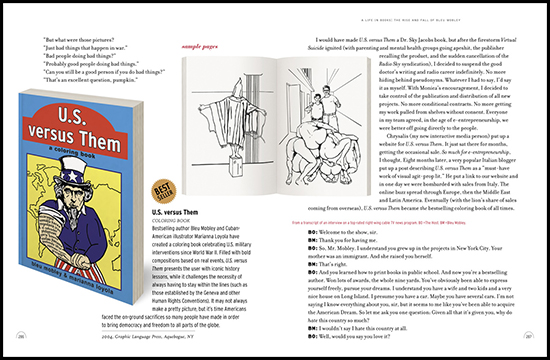 A LIFE IN BOOKS: The Rise and Fall of Bleu Mobley is an illuminated novel containing 101 books within it, all written by an author who finds himself in prison looking back on his life and career. Over the course of one night, in the darkness of his prison cell, he whispers his life story into a microcassette recorder, tracing his journey from the public housing project of his youth to a career as a journalist, then experimental novelist, college professor, accidental bestselling author, pop-culture pundit, and unindicted prisoner.

Mobley’s autobiography is paired with a review of all 101 of his books, each represented by its first-edition cover design and catalog copy, and more than a third of his books are excerpted. The resulting retrospective contrasts the published writings (which read like short stories) with the confessional memoir, forming a most unusual portrait of a well-intentioned (if ethically challenged) visionary.

A Life In Books is a funny and deeply human exploration of one man’s use of books as a means of understanding himself, the people around him, and a half-century of American/global events. It celebrates the mysteries and contradictions of the creative process, and grapples with the future of the book as a medium and the lines that separate (and sometimes blur) truth, myth, and fiction.

Warren Lehrer is a writer and artist known as a pioneer in the fields of visual literature, book arts, and design authorship. His books, acclaimed for capturing the shape of thought and reuniting the traditions of storytelling with the printed page, include: A Life in Books: The Rise and Fall of Bleu Mobley (Goff Books); Crossing the BLVD: strangers, neighbors, aliens in a New America (W.W. Norton) with Judith Sloan, The Portrait Series (four book series, Bay Press); GRRRHHHHH: a study of social patterns with Sandra Brownlee and Dennis Bernstein; FRENCH FRIES with Bernstein (VSW); i mean you know (VSW), and versations.

Lehrer has received many awards for his books and multimedia projects including the Brendan Gill Prize, the Innovative Use of Archives Award, The IPPY Outstanding Book of the Year Award, three AIGA Book Awards, a Media That Matters Award, a Best New Fiction Award, a National Indie Book Award, a Prix Arts Electronica Award, and grants and fellowships from the NEA, NYSCA, NYFA, and the Rockefeller, Ford, and Greenwall Foundations. His work is in many collections including the Museum of Modern Art, LA County Art Museum, The Getty Museum, Georges Pompidou Centre, and Tate Gallery. The Crossing the BLVD exhibition, connected to the book of the same name, co-authored with Judith Sloan, has toured to 15 sites around the US. His performances and plays have been performed at venues including La MaMa Experimental Theatre, The Knitting Factory, Independent Art at Here, The Painted Bride, the Market Theatre (Johannesberg), and the Theatre Workshop (Edinburgh). He is a frequent lecturer and keynote speaker at universities, conferences, festivals, art and literary centers. Lehrer’s performance/reading tour of A Life In Books began as a Keynote Speaker at The NY Art Book Fair at PS1 MoMA and continues throughout the US and Canada. Lehrer is a Full Professor at Purchase College, SUNY, and a founding faculty member of the Designer As Author grad program at SVA. Together with Sloan, he founded EarSay, a non-profit arts organization in Queens, NY. A Life In Books is Lehrer’s tenth book, his first novel.