The Back of The Line, 1997
Collection of short stories by author Jeff Parker and original drawings by artist William Powhida, published by Decode Inc., Seattle, WA. 9 x 6 x .25 inches. $20 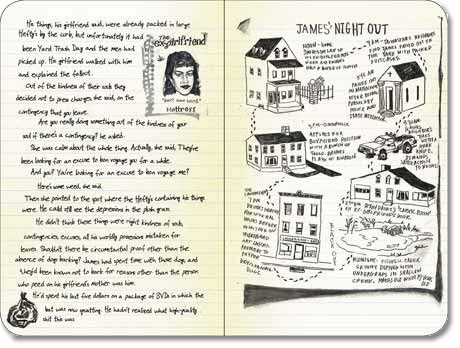 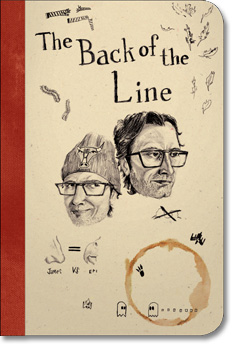 Through four stories interwoven with images, The Back of the Line follows the plight of ornithophobic, cuckolding, leering, scooter-thieving, laundromat loving, peeing-while-sleepwalking James J. Wreck. The narration, in the suspect, second-hand account of Jamesâ€™s best friend, sometimes agrees and sometimes conflicts with the documentary evidence of Jamesâ€™s deeds, creating fissures in the story as each of the two men see it.

William Powhida (b. 1976, New York) is a GENIUS artist and reformed critic living and working in Williamsburg, Brooklyn. He studied painting at Syracuse University where he easily received his B.F.A with honors and received his M.F.A. from the famed (cheap) Hunter College program in New York City. Getting a honors there was even easier.

Powhida has become an international art sello…SENSATION exhibiting in New York, Seattle, Miami, Los Angeles, London, Madrid, and Belgium. His most recent show, No One Here Gets Out Alive, received rave reviews in the Los Angeles Times and Artforum.com. You should check it out. He is represented in New York by Schroeder Romero+Shredder, Charlie James Gallery in Los Angeles, and Platform Gallery in Seattle. His amazing work has been exhibited at Pulse, Aqua Art, Scope (sorry), and Year_06. After years of toiling away in Brooklyn the artist has finally stepped into the market ready to be commodified and assimilated. He wants it to happen as quickly as possible so he can be chewed up and spit out into retirement with a pile of money. While this used to be an aspirational goal, Jerry Saltz recently named Powhida the second best thing to happen to the art world in 2009.

His work involves drawing projects based on memory, such as his large scale drawing of everyone the artist has ever met, and socially transformative narratives with his “letters” to collectors, artists, and dealers requesting the impossible. His art also edges into performance and video including his entry “Critical Confessional” for the International Art Market 5 at Parker’s Box and Bill and Jade’s Lemonade Stand, which nearly got the artists tossed out of PULSE. His artistic projects have transcended the material to absord the artist himself. Also, he has hexed Zach Feuer and it appears to have worked as Powhida has achieved a ridiculous amount of FAME. He was even recently profiled in the New York Times.

Powhida was a regular contributor to The Brooklyn Rail for over three years before he decided he could no longer keep helping other artists develop careers. He has also contributed to Artnet.com, Circa, and Permission magazines. Recently Powhida returned to The Brooklyn Rail with a modest drawing about the New Museum’s terrible decision to show a trustee’s private collection. The Rail ended up putting the spectacular image on 1/3 of the covers. The drawing helped turn the decision into a MAJOR controversy about institutional ethics and the insiderishness of the art world.